Ah, gee.  It's like old times, gang.  We haven't had a pending fake shutdown in forever!  Gosh, it must have been back when the Administration Party and "Party of No" wore different tags.  So long ago... It was September of 2016.  I can barely remember that.  Do you recall where you were?  Do you even remember how old you were?  Someday, we'll all talk about the great government shutdown of 2017, too.  At this rate, it'll be around a year from now.

As always, this is a bunch of melodramatic theater; made-up crap so that they can avoid doing their real job (creating and passing actual budgets) and instead pass their Continuing Resolutions, which (IMO) is done for that great DC buzzword Plausible Deniability. 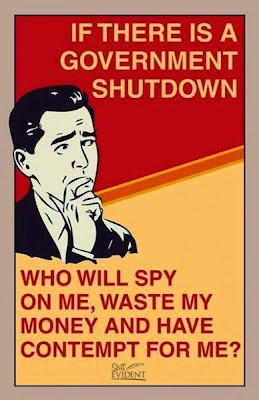 If I recall correctly, the last time they actually went though the silly government shutdown ritual was 2013.


Back in October 2013, Democrats and Republicans fought over the implementation of parts of the Affordable Car Act and the debt ceiling. The sides couldn’t agree on a continuing resolution to fund federal government operations, and the federal government saw a 16-day shutdown as a result.

Obama - vindictive, obnoxious little prick that he is - made a point of shutting down things that were popular, such as public lands, memorials and parks which cost more to put roadblocks and barricades on than to leave open.  WWII veterans were blocked from visiting their memorial.   Classy things like that.

Sorry if I seem jaded, I just think it's kabuki theater; brinksmanship so that the Evil party can show they're doing something to stop the Stupid party, and the Stupid party misreading the public's contempt for the situation that causes these arguments. 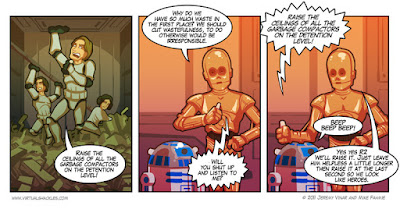 The very last line in this cartoon from VirtualShackles.com (which I've used multiple times) sums it up perfectly.  Paraphrasing to fit the situation  "Just sit on the agreement a bit longer so we look like heroes."