Building Up The GB-22

By now, I'm sure that most people have heard about Mark Serbu's GB-22, a single shot, 22LR pistol.  Mark makes the argument that this could be considered the worlds simplest gun.  It has four basic parts: the frame, the slide, a barrel and a spring.  Mark basically introduced it to the world through this video, which immediately gathered an enormous following with the video being viewed over 1.2  million times before someone pressured YouTube into taking it down.

Mark is the head of Serbu Arms, a small company in Tampa, Florida, probably best known for a bolt action, single shot 50BMG rifle called the BFG-50 (and, yes, BFG stands for what you think it does).  He had the idea that it would be fun to make a dirt cheap and simple gun to turn in when the gun buyback programs come around.  If it costs $25 to make a gun and the buyback will give you a couple of hundred, you've made out well.  Do they offer that much?  We don't have gun buybacks around here, so I don't know.  Mark made a single shot .22 from a piece of waterjet cut steel, a 1" square bar cut into two pieces and a few other parts.  Naturally, everyone flooded him with "we want plans" and "we want kits".  I ordered plans as soon as they became available.

Does it make sense to make a gun for a buyback?  It depends on how functional you want it to be and on what your capabilities are.  If doesn't have to fire at all, or doesn't have to be accurate, I bet you can make one fairly easily.  Can you rifle a block of steel with a hole in it to create a .22 barrel?  Ream a chamber for it?  That would save you a lot of money, if you already have the tools and don't have to buy them.  That leads to asking how much does it cost to make a GB-22?

With the prints in hand, I went to Online Metals today to figure out what it costs to make this gun.  The single most expensive piece in this gun is an apparently nicely machined barrel I found on eBay (the seller was listed by Royal Nonesuch).  This is the part where if you can rifle the chunk of steel, you can cut the cost of the GB-22 by about a third.  The next most expensive piece is the frame, cut from 3/16" 4130 steel.  I've got to assume Mark had some sheet lying around, but I sure don't.  I spent a bit of time getting some of Mark's drawings into Rhino3D, and after some playing, determined it's possible to get four GB-22s out of one 12x12 sheet of 4130 steel.  That gets the cost of a frame down to $11.96 plus shipping, compared to $21.25 for the barrel.  Everything else is rather cheap. 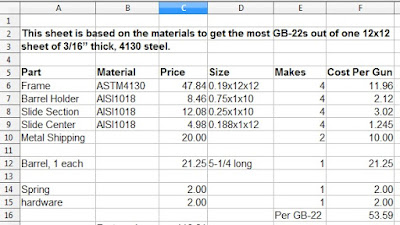 If that's enough steel to make four GB-22s (and I believe it is), each one will cost $53.59 in materials alone for the gun.  I swagged $2 each for some hardware and the recoil spring.  That is purely PFA.   Would you sell one to Bloomberg for $50?  Not me.  $100?  I think any reasonable hourly rate makes the gun worth more than that, unless you have a really well automated shop. 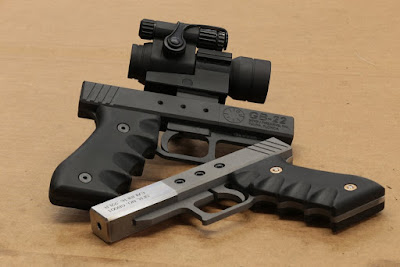 Two of the guns Mark made, with fancy Delrin grips, and one with optics on it.  Anyway you look at it, it seems like a fun little project.

The reason to make one is because we can.  BTW, search on GB-22s on YouTube.  There's a few videos of updates and changes, including a .380 version (beefed up and made of stainless) along with a closed bolt version from Mark that ejects its own brass.  Most of the time.