Cody Wilson Sticks A Finger in the Judge's Eye

Upon rereading the judgement against Defense Distributed for the 29 Godzillionth time, they had a realization.  The judge ruled he couldn't give the files away.  So he'll sell them.  For whatever you want to pay.


Defense Distributed founder Cody Wilson crushed their short-lived happiness during a Tuesday press conference where he revealed that he actually won't be stopped from sharing technical data; he will simply sell the files via his website, defcad.com. (Yes, he can do this.)

"A lot of this to me was about principle," he continued. "For many years, I just chose not to sell these files, because I'm an open-source activist. I believed in demonstrating that there was a right to commit this information to the public domain."

"But, this is my opportunity to correct the media all in one place. To read headline after headline about how you can no longer 3D-print a gun, you can no longer have these files, this is not true. This has never been true. I now have to demonstrate this to you, forcefully, to deliver the point."

There is no set price for the material; patrons are asked to give whatever they'd like in exchange. Wilson said the money would be used for further legal fees.

"Everyone who wants these files in America can get them," he said. "They're allowed to name their own price at our website. Making money is not important to me."

The 30-year-old said he's "happy now to become the iTunes of downloadable guns if I can't be the Napster," but added that it was somewhat "regrettable" that state attorneys general drove him into the commercial space.

"The only person who was hurt by the [Seattle ruling] is the common man," Wilson noted later in the presser, again adding that he will not be stopped.
Defcad will also allow the public to sell their own files via the site.

Allow me to remind you again of the DefCad fundraiser.  Yet another interesting thing about Defense Distributed is this promise.


"What are we? We call ourselves Defense Distributed," Wilson said in the video. "We're a defense contractor. We don't contract with the state. We contract with the public. So, I'd like to come to terms. If you will fund this fight for me, I will offer two new contracts to you." 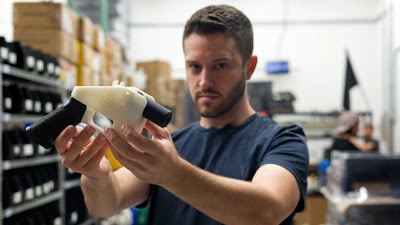 Cody with one of the Liberator pistols, of course. Photo by Kelly West/AFP/Getty Images.

If you go to the DefCad Fundraiser you can contribute.  Or you can go to the top level site, pick out the designs you want and get something for your bucks.  Either way, every time someone downloads a file, a gun grabber cries.