NASA's X-planes are justly famous.  The X-15 rocket plane from the 1950s that came close to suborbital spaceflight, the X-1 that broke the sound barrier for the first time, and the X-29 with its bizarre, reverse swept wings, to name just a few.

This year, NASA announced they've cut a contract to produce the next plane, the X-59 aimed at researching a hot area of aviation: whether supersonic aircraft can be designed to produce less boom and become commercially viable - a topic I covered a few years ago.


To help with that first issue, noise, specifically the sonic booms generated by aircraft breaking the speed of sound, NASA plans on building its first manned X-plane in decades, the X-59 Low Boom Flight Demonstrator (LBFD). The single-engine jet will be built by Lockheed’s Skunkworks as they were the only company to submit a bid on NASA’s request for an aircraft. Lockheed, which will be paid about $247.5 million for the single aircraft has a vested interest in supersonic flight; it is partnering with Aerion on a supersonic 12-passenger business jet.

To summarize the earlier discussion, everyone has heard about (or heard!) sonic booms.  When an aircraft passes through the air it creates a series of pressure waves in front of it and behind it, similar to the bow and stern waves created by a boat. These waves travel at the speed of sound, and as the speed of the aircraft increases, the waves are forced together, or compressed, because they can't get out each other's way. Eventually they merge into a single shock wave, which travels at the speed of sound.  This expands in a cone behind the plane and creates a loud sound, sometimes close to the volume of an explosion.  On a smaller scale, virtually all rifle rounds are supersonic and much of what you hear at the range is the sound of the sonic boom the bullet generates.

A theoretical model was developed by aerodynamics researchers that said the aircraft's shape could be modified to change the interaction of the waves and reduce the "boom".  Tests were performed by modifying existing aircraft and results confirmed there was improvement, leading to this X-plane program.  Rather than small modifications to an existing air frame, this one starts with a clean sheet.


That theory postulated that shockwaves generated from the front and rear portions of a plane as it sped past Mach 1 coalesced or joined together as they expanded away [from the] plane, creating two thunderous booms when they hit the ground. So, NASA’s X-59 will have a fuselage shaped by aerodynamicists so that there will be small and nuanced volumetric changes from nose to tail designed so that shockwaves off the plane do not come together and coalesce as they move toward the ground. It is hoped they create an S-shaped boom that creates a mild thump as loud as a car door closing, not the classic double-bang of an N-wave sonic boom. 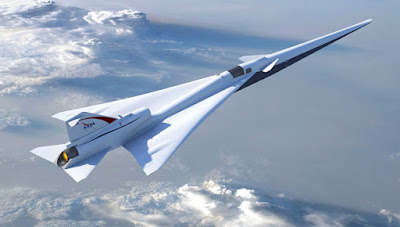 (X-59 concept art.  The engine is mounted above the wing and shielded from the ground. This should direct engine noise up, keeping it from being too loud on the ground under the plane’s flight path.)


“The airplane is a brand-new shape,” says LBFD program manager at Lockheed Martin Peter Iosifidis. “Everything else within the plane, however, is commercially off the shelf or salvaged from other aircraft.”

The plane will also fly slower than the Concorde since speed is directly related to the sound level of the boom. The cruising altitude will be above 50,000 ft, about 15,000 ft higher than most airliners’ cruising level. Higher altitudes soften the booms.

The plane is designed to replicate the sonic boom of a small supersonic airliner. It is predicted to have a maximum boom loudness of 75 PLdb when going Mach 1.5 at 55,000 ft. The Concorde generated a boom of about 110 PLdb when cruising at Mach 2. (PLdb stands for “perceived decibel level. It was developed to compare the loudness of aircraft in flight and takes into account the frequency content, rise time, and several other acoustic parameters.) Flight experts think a PLdb of 75 would be low enough that regulators would permit unrestricted supersonic flight over land, but NASA’s goal is to get the X-59’s boom down to 70 PLdb.

“This is a purpose-built experimental research aircraft,” says director for air vehicle designs and technologies at Lockheed Martin, Dave Richardson. “It is not a prototype for a supersonic business jet or weapon systems. It is not a derivative or some other modification an existing airplane.”

(Confidential to Lockheed: your last few dB from 75 to 70 will probably cost as much as going from 110 to 75.  DAMHIK)  Current schedule is for the aircraft to be delivered to NASA in 2021, with first test flights from Edwards AFB's supersonic test range.  This will be to confirm safe flight and then make measurements of the sonic booms (with some interesting photographic techniques I could do a separate piece on).


Then from 2023 through 20205, Phase Three, the plane will make “community response” flights staged out of Armstrong Flight Research Center located inside Edwards AFB. There it will flyover some as-yet-unnamed California cities. Then it will demonstrate its hushed sonic boom over four to six other cities around the U.S. The communities’ responses to the sonic booms, along with readings from ground and flight instruments will be given to the U.S. and international flight agencies. Those agencies could use this data to rewrite the rules governing supersonic flight over land and open the hangar doors to faster-than-sound passenger and cargo travel over the U.S. and other countries. If the booms are too loud and obnoxious, however, supersonic flight over land will remain a dream. 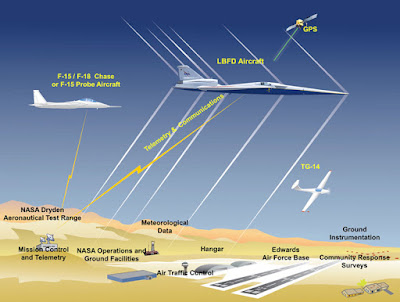 (The X-59 will fly precise flight profiles as it creates sonic booms. The chase plane will also have to maintain a precise flight path as it maintains a set distance from the NASA plane while it takes schlieren photos of the X-59 backlit by the sun as both fly supersonic. A TG-14 plane will record the shockwaves in the air, and NASA will record the sonic booms those same shockwaves make on the ground. Later analysis will let NASA determine how turbulence and weather affect shockwaves.)

I'm a little schizo on this.  It is pretty cool.  If we're going to pay for a National Aeronautics and Space Administration, this is exactly the kind of research they should be involved in.   On the other hand, if they're not able to do it, someone like Lockheed or Boeing should be paying for it out of their own R&D funds.