Hot Enough For Ya?

Administrivia - my blog reading list has been shortened by dropping a couple of guys that haven't updated in a year.  I'm sorry to let the Mogambo Guru go, but his last post was August 3rd of last year.  I know Richard's retired now, and has been for several years, but his silly, self-deprecating writing about gold and real money always struck a chord with me.


I bet you've heard stories about a few "hottest temperatures evah" records being set this summer. You probably don't know that most of those haven't been real, but have been due to siting issues with the weather stations. Watts Up With That has been covering this well, of course.

For example, on July 6th there were reports that the all time world record temperature was broken, in Ouargla, Algeria, reporting a temperature of 124.3 degrees.  (Pause for all the Texans to say, "hold ma beer")  The problem is the thermometer is located at an airport with a large military presence, right next to the tarmac.   Guess what?  Jet wash is hot.  Even hotter than Algeria's desert air.  It makes the temperatures measure high.

This is a recurrent theme; the location varies, but the records keep getting reported.  In a similar story, the all time Scottish high temperature record was dropped when they discovered an ice cream truck had parked next to the thermometer station - running its engine continuously to power the refrigeration.  The temperature measuring station is in a parking lot, surrounded by black top, that's part of what appears to be park with boat ramps and (I expect) lots of traffic.

You probably heard that Spain set a new all time record.  In this case, the monitoring station is in a state of poor maintenance.  The thermometers are supposed to be mounted in whitewashed wooden boxes with slats for ventilation.  The box in Spain is now brown from losing its whitewash.

When Anthony Watts (who founded WUWT) started the blog, he was running what he called the Surface Stations Project.  The idea stemmed from a simple little question: those boxes are supposed to be whitewashed.  Many were instead being painted with a different sort of finish, so Anthony wondered if the different white finish would give the same results as the old way.  Along the path to answering that, he discovered that over 90% of the surface stations in the US didn't meet siting standards for the accuracy needed.  How can the temperature record be trusted if the data is no good?  And the US is supposed to have the best data.

It goes on.  Headlines recently said Death Valley set a record for its monthly high temperature this July.  The siting issue here is that the thermometer is located in the parking lot of the visitor's center, and as the number of visitors goes up, the chances of vehicle exhaust or other non-weather related things affecting temperature go up as well.  There are a number of other things in the vicinity, including large solar power panels (photovoltaics), and a change in the reflectivity (albedo) of much of the area, which is sure to effect temperature.   The most important thing to know is that there is a monitoring station a few miles away from the visitor's center that is sited much better; it's monthly temperature for the same period was 1.5 degrees cooler.

I have a habit of referring to summer here as life in Crematoria, the fictional prison planet in Vin Diesel's "The Chronicles of Riddick".  Truthfully, I know that we're better than some places.  We get a seabreeze almost every afternoon that dissipates even a few miles inland from here and I'm thinking of places I've been in the desert Southwest that don't get a lick of breeze.  It's summer in the northern hemisphere.  Hemisphere-scale patterns have set up hot in the western US and much of Europe.  In trade, a lot of the plains and Midwest aren't as bad.  It's summer; it's hot.

Remember when weather was weather, and every little storm, cold front or warm front wasn't a harbinger of Climate Doom?  That's still really the case. 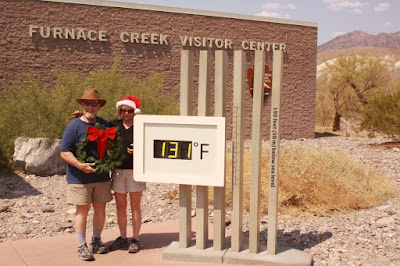