One of the headlines from Machine Design this week tells us "Uranium Extracted from Seawater" with a note saying it was done with "modified acrylic yarn".  The story, unfortunately, talks about some of the big-story facts, but doesn't provide details.

“This is a significant milestone,” says Gary Gill, a PNNL researcher. “It indicates this approach can eventually provide commercially attractive nuclear fuel derived from the oceans, the largest source of uranium on Earth.”

The engineers at LCW developed the acrylic fiber which attracts and holds on to dissolved uranium naturally present in ocean water. It was made from an inexpensive yarn that was chemically modified into an adsorbent and selective for uranium, and efficient, and reusable.  The yarn’s adsorbent properties are reversible, and captured uranium is easily released for processing into yellowcake. An analysis of the technology suggests that it could be competitive with the cost of uranium produced through land-based mining.

A search at PNNL shows the work was divided by specialties and involved several of the national labs.  The piece goes on to say that uranium is present in seawater at the part per billion levels, about 3 PPB, then goes on to drop this bomb (pardon the pun):


... it's estimated that there is at least four billion tons of uranium in seawater; this is about 500 times the amount of uranium known to exist in land-based ores, which must be mined.

As we all have seen, mining on land is not without its ecological drawbacks; removing uranium from seawater would have to make greenies happy; except that they hate nuclear power.  Mining underground brings issues that just aren't there with extracting it from seawater.  More importantly, they estimate the known uranium deposits on land will last 100 years and prices will certainly go up this century as those sources are extracted.  "Mining the oceans" will make much more uranium available.  They then go on to say the yarn can be modified to collect other metals and could be useful for all sorts of environmental clean up work.  Another metal they mention in particular as a target for the technique is vanadium, an expensive metal used in large-scale batteries. 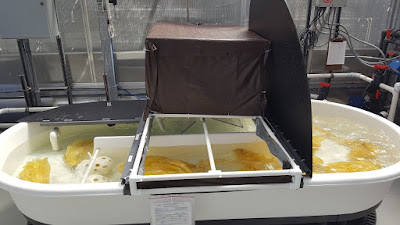 The test vessel, in which a kilogram of the yarn was exposed to circulating seawater and produced 5 grams of yellowcake.   PNNL photo.