Electric vehicles come up fairly regularly around here, and one of the weak spots of EVs is the amount of time spent in recharging, which leads to inferior performance for most buyers compared to an internal combustion vehicle.  While going through some old links ("I ought to read that..."), I stumbled across an audacious plan published in Power Electronics magazine back in February.  What if the entire infrastructure was designed to accommodate electric cars, so that they could be charged during operation?  Maybe instead of audacious, we should say "mindbogglingly expen$ive".

From a technical standpoint, it doesn't look like there's new tech that has to be completely invented; it's re-using existing ideas.  They need to be optimized for this use, but what they have to do is probably well understood.  If you have a phone or other personal electronic device that's put on a charging mat it's probably the same technology: a common electrical component called a transformer is conceptually split in half: one side is in the mat and the other in your phone.  In this case, one side of the transformer would be buried in the road and the other half mounted in the car.  The combination is called Near-Field Wireless Power Transfer.  This won't be as efficient as plugging a car in, but with dense enough placement of these transformers, the cars could have their batteries continuously topped off by the road.


Near-field WPT systems are of two types: inductive, which use magnetic field coupling between conducting coils, and capacitive, which use electric field coupling between conducting plates to transfer energy (Fig. 1). For medium-range applications (in which the distance between the transmitter and the receiver couplers is comparable to the size of the couplers, as in EV charging), inductive WPT systems have traditionally been preferred. 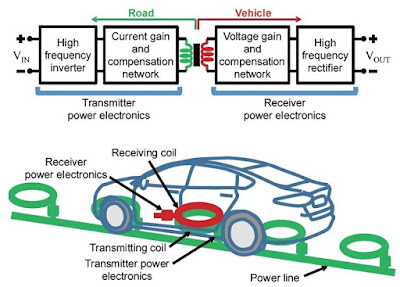 A simplified electrical block diagram with the transformer coils shown as green for the road and red for the car.  The concept drawing of the car shows its transformer coils in red passing over the green coils in the road.   The same figure could be redrawn with minor changes to show metal plates (capacitors).  There are profound circuit differences between the magnetic (inductive) coupling based on transformers and the electric (capacitive) coupling based on capacitors, but conceptually they're just transferring power either as an electric field or magnetic field.  The authors appear to do most of their analysis based on capacitive coupling after arguing that the transformers will depend on large hunks of ferrite (a ceramic with iron powder and other metals fired into it) while the capacitor approach will rely more on high performance electronic circuitry.  They expect the ferrites will be more expensive than the electronics approach and the electronics will get cheaper over time.

Let me break from the technical details here, and say if you want to read them head over to Power Electronics.  Honestly, they assume more familiarity with electronics than I'm doing, but not much.

What I want to address is the sheer megalomania of it, and some of the obvious problems. The article begins like this:


Consider a future in which a driverless ridesharing electric vehicle (EV) pulls over as you exit a building, takes you to your destination, and proceeds to drive passenger after passenger without ever needing to stop to recharge its battery. Instead, power generated by nearby wind and solar resources is delivered wirelessly from the roadway to the vehicle while it is in motion.

Not having to stop for recharging will make EVs truly autonomous, and, because the vehicles can thus remain in service for more hours, fewer vehicles will be needed to meet passenger demand. Furthermore, EVs with in-motion (dynamic) wireless charging can have much smaller batteries, an option that can reduce their cost and accelerate adoption.

Think of what it would cost to put electric plates with supporting electric circuitry every few feet down every road in a city; any road you don't put charging circuits on would be a back road either not-served or not well-served by electric cars, depending on how well they'd be charged and how long they could go without being charged.

Did you notice the part where it said you'd call a "driverless ridesharing electric vehicle"?  That means it's some sort of future where you're not going to be driving your own car, some entity like the city or state or some crony, er, contractor to the city or state will be renting rides to/from where you want to go.  As long as it's on a road that has the required million dollar a mile (PFA number) worth of electronic circuity.  Think back to the back road that won't get the electronic charging circuits; is that an ideal way for politicians to get "contributions" to ensure they make sure those businesses get a new road?

On this basis alone, I say it ain't happening this way.  Cities and states are far too broke to do something like this.  This is a massive, gargantuan public works job.  Only someplace as crazy as Califruitopia would spend on something this crazy, if even they would.

Now think of the safety.  Those electric fields from the road are capable of transferring energy into pedestrians and animals, too.  The cars would need to be specifically built to shield the occupants.  The metal plates in the road would need to be able to sense when the vehicles are moving over them, pulse the power on and turn it off when the vehicle goes past.  That only adds a little cost.  The fact that the plates are in a road actually adds a little safety; after all, a stray dog or a kid will be more likely to be killed by being hit by the car than the electric field.  (That was irony - nobody would think that's a good idea).

The cars would have to be pretty well aligned over the plates to get a good percentage of the electrical power across (i.e., good coupling).  Any placement to the side, rather than directly over/under each other would decrease the coupling.  The car couldn't be too high off the ground either: ground clearance would be a design requirement.  Any snow, or other foreign matter (like discarded hypodermics or feces, speaking of California) would make the charging less efficient. 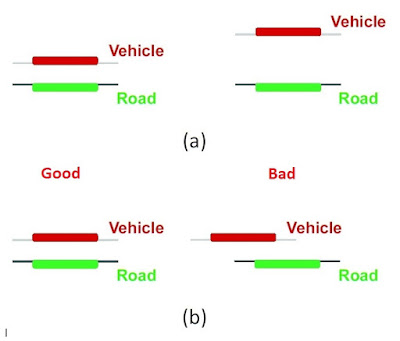 Like most of these wild-hair design proposals that get into these magazines, this is the author's lab at the University of Colorado Boulder, showing you what they can do.  This doesn't have a snowball's chance in Florida of being adopted.  In my opinion (of course).