From the National Shooting Sports Federation newsletter Ammoland, we find the story of a salmon researcher in Washington's Okanogan forest who was circled and surrounded by a pack of wolves, climbed 30 feet up a tree to keep from being eaten, and was almost abandoned to the wolves by the state.  According to a linked piece in the Capital Press, Washington Department of Fish and Wildlife (WDFW) officials sounded more concerned about not harming the wolves than letting the woman be eaten by the wolves.


Washington wildlife managers initially opposed sending a helicopter or a search-and-rescue team to save a woman treed by wolves in the Okanogan-Wenatchee National Forest, according to recordings and summaries of emergency calls obtained Tuesday.

The Department of Natural Resources pushed back and prepared to dispatch an air crew that eventually executed a swift rescue. Notes from a call between DNR dispatcher Jill Jones and a wildlife officer summarized WDFW’s position, and her position, shortly before the helicopter launched.

“We are more concerned for her life than the listed animal,” Jones told the officer. “He indicated that she is safe up in the tree. ... I told him that we do not know how safe she is. I don’t know how stout the tree is, and if the limbs will continue to hold her or how long she can hold on.”

Minutes later, WDFW and U.S. Fish and Wildlife Service officials, at the request of DNR wildfire supervisor Chuck Turley, OK’d an air rescue. Within a half hour, the woman was safe in the DNR helicopter piloted by Devin Gooch. The wolves had scattered as Gooch flew overhead before landing in a meadow.

The swift air rescue — reaching the woman by foot would have taken 2 to 3 hours, officials estimated — ended a hectic 45 minutes in which state, federal and local agencies discussed what to do.

In hindsight (always 20-20), WDFW wolf policy coordinator Donny Martorello said the wolf experts thought the woman was in no trouble, but later admitted they were making the wrong call.  “To tell the helicopter not to go was not the right call, and we have to own that,” Martorello said.

Bottom line to me is that the woman is very lucky to be alive.  First, the wolves didn't ambush her; she saw them and had time to react.  She pepper sprayed the first wolf, and more came forward to take his place.  Second, she's lucky there was a sturdy tree there, lucky she was able to climb that tree to 30 feet and lucky she was able to wait there safely.  If the branch she had been standing or sitting on had broken, the 30 foot fall probably would have left her unable to move, and she'd be an easy target for the wolves.  What if she was up there and couldn't call for help by radio or cellphone?

Dean Weingarten, in the Ammoland News says the wolf apologists already have an answer from the "wolves are not a threat to people" file.


Researchers have already created an excuse for the aggressive wolf behavior. They say the area the woman was in is a “rendezvous site”; therefore the wolf behavior was “defensive” not aggressive. From mailtribune.com:


They determined that where the researcher was treed was a “rendezvous” site, and the wolves were likely acting defensively to protect offspring or food sources.

Look, I love animals, too, but the tree huggers and greenies that pushed the reintroduction of wolves in America are putting people at risk.  I have a pair of rescue cats around here who regularly boss me around, and while I've had many more cats than dogs in my life, I've had both.  Wolves are not domesticated dogs, they are extremely intelligent, top-echelon predators.  We're told that wolves are "not really dangerous" and "wolves never attack people".  If wolves aren't a threat to people, why do so many legends and sayings (one example) from our ancestral civilizations say they are?  Like mountain lions, wolves require massive ranges of land.  Lions are solitary hunters, not pack hunters, but attacks happen. Why should we think wolves won't attack people?  Weingarten puts it this way, and concludes with an unsettling observation:


When European immigrants first came to North America, they assumed that wolves were dangerous. All of their experience in Europe showed wolves to be dangerous. Wolves in North America are the same animals as wolves in Europe.

The mythology of the harmless wolf was created out of the success of the developing North American civilization. They were successful at protecting themselves and their animal resources from wolves. The European immigrants brought technology that was effective in keeping wolf populations on the defensive, afraid of contact with man. When wolves came in conflict with men who had access to firearms, steel traps, and poison, wolves learned to fear men or die.

The best way to keep wolves harmless is to keep them in fear of man. This pack in Washington state has successfully treed a woman, without any loss. They have learned from the experience. They are likely to treat the next human more aggressively. 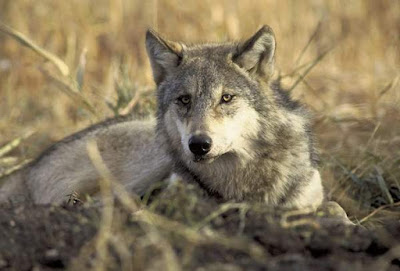 File photo of a gray wolf, the species in the area.  John and Karen Hollingsworth/US Fish and Wildlife Service

Labels: big freakin' out of control government, enviro-nuts and flakes