Those of you who have spent too much time in front of a TV will recognize that line from an old  commercial (substituting "mints" for "parts").

The two parts in one is the crank arm for my fire eater engine.  It's a complex little part that is mostly made on the rotary table, except for some drilling, reaming and tapping of five holes.  That meant going from the milling vise for cutting the piece to size, drilling, tapping, and reaming; over to the rotary table for the three radiused cuts; back to the milling vise to cut the tapers, and finally to trim off the brass plug I turned to size and press fit into the 3/8" hole.   Almost every cut meant re-establishing the coordinates.

This is the drawing for the part. 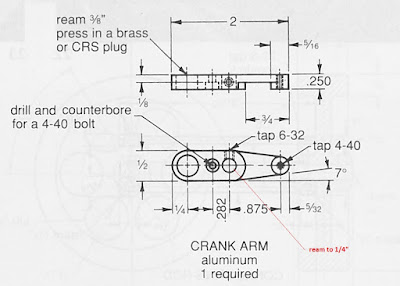 And this is how it came out. 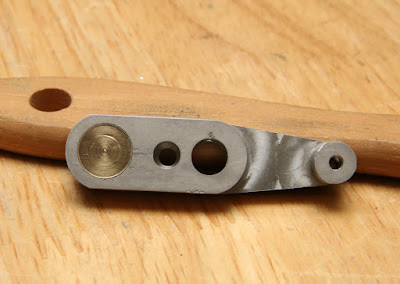 The brass plug started out as a cube roughly 1/2" on a side cut from a piece of scrap brass I've used for practice cuts.  It was held in a four jaw chuck on the small lathe until I could turn enough of it into a smooth cylinder.  A smooth cylinder meant I could turn it around and get a better grip on it with a three jaw chuck.  Once in that chuck, it was turned until it was a press fit into the crank arm.  The crank arm is 1/4" thick, though, so I had to trim off about a half inch of brass that was sticking out of the back.  The tool for that seemed to be my smaller mill, and I trimmed it to just a bit over the thickness of a paper gum wrapper that was handy - about .002 above the surface. 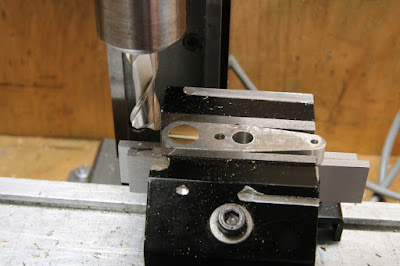 It has taken a long time to be able to say this, but this part completes the machining of all the parts in the engine.  Left to do is to make the mounting base plate the engine will sit on.  The plate needs four holes to be precisely located and drilled.  Other than that, I need to get/make a couple of springs.  It's almost time to build it.