Shopify, Banks and the Rising Threat to Legal Commerce in Firearms

I'm sure that by now you've heard that the online commerce service for business, Shopify, suddenly started shutting down any businesses that have anything to do with guns.  That article focuses on Spike's Tactical and Rare Breed Firearms.  The same thing has happened to Defense Distributed and a host of other companies as well.  Cody Wilson's Def Dist has been particularly hard hit. Def Dist is a non-profit and with the money they've spent on Shopify now thrown away because Shopify suddenly changed policies, they've created an online fundraiser on their own servers to try to raise funds for the legal battles ahead.  Cody Wilson intends to sue Shopify to get that money back.

We need to think about this in wider terms.  David French, writing at National Review, presents arguments that this is a coordinated attack by all the usual anti-gun forces.  He doesn't mention the Parkland shooting, but you will recall that in the immediate aftermath the NRA was blamed for everything, and a "Ban All the Things!" cry was everywhere.  French argues that the anti-gun forces realize they can't win politically so the next best thing is bullying businesses, especially banks and financial institutions, to cut the businesses off.

After all, he begins, from the standpoint of government restrictions on Second Amendment rights, the future looks bright.  The elevation of Brett Kavanaugh to the Supreme Court (not a done deal, but a very strong bet) may well represent the death knell for draconian forms of gun control — including bans on so-called “assault weapons”, and standard-capacity magazines in semi-automatic pistols and rifles.  Moreover, meaningful federal gun control has been blocked for a generation, ever since the "red wave" after the Clinton AWB, and red-state legislatures are generally moving to liberalize state gun laws - Florida's gun control madness after Parkland a counter example.  On the other hand, consider the steady spread of “constitutional carry” and “shall issue” across the country.


But another threat looms, one that can stretch across the entire American landscape, is immune to the filibuster, and is largely sheltered from judicial review. It’s a threat that can choke off financing for the gun industry, stifle speech about guns, and lock the gun-rights community into offline (and small online) ghettos that restrict their ability to communicate.

So, what’s happening? Titans of American banking and communication are taking steps to restrict the use of their funds or platforms by gun makers, gun-rights advocates, and others. The threat is just now emerging, but it may be as great a danger to gun rights as it is to the culture of free speech in this nation, and indeed the two are linked.

French then goes on to recount the stories of Citibank and Bank of America, from March and April respectively.  I think most of you recall this - many of you whom I read said you were cutting up cards from those companies.  This latter one immediately puzzled me because BoA is the company behind Bass Pro Shops MasterCard.  In terms of sheer dollar volume, Bass Pro / Cabela's is undoubtedly one of the largest gun sellers in America.  BoA said they were going to not lend money to manufacturers of AR-15s, are they going to draw the distinction that they won't lend to manufacture them but they'll lend to sell them?   This week, I got a more clear picture.  I have a Bass Pro/BoA card (they gave me a big discount on some boat work) and I received a letter from them saying BoA will no longer issue the Bass Pro Card.  Capital One will issue us all new cards which go into effect in October.

French then talks about other movements against guns that make life for gun owners harder but don't involve the government.


Facebook has recently restricted any links to a website called codeisfreespeech.com, which contains downloadable plans for a number of entirely legal firearms, including the 3D-printable firearms at the heart of the lingering Obama-era case against Cody Wilson. The site includes plans for weapons such as the Colt 1911, a weapon so common and so basic that its plans date back to, well, 1911 (actually before). You can even buy the plans on a t-shirt.

YouTube has its own restrictions on speech about firearms and prohibits any content that “intends to sell” firearms or provides instructions on “manufacturing a firearm.”
...
Reddit has banned certain gun forums and updated its policies to forbid using Reddit to “solicit or facilitate” (extremely broad terms) transactions or gifts involving firearms.
...
Amazon Web Services has reportedly removed codeisfreespeech.com from its web servers, and Shopify just updated its free-speech policies to deny space for “the kind of products intended to harm.” It also placed on its “restricted items list” all semi-automatic weapons packaged with detachable magazines “capable of accepting more than 10 rounds.”

Think of New York governor Cuomo's attacks on the gun industry and the NRA, aimed at getting the financial companies headquartered in NYC to financially isolate them, as part of this bigger picture.

Washington Free Beacon reporter Stephen Gutowski, whom French calls "perhaps the Internet’s best one-stop journalistic shop not just for technical expertise on firearms but also for national trends in gun control" has been diligently covering the recent trend of increasing corporate restrictions.  He noted that the corporate actions have been “more aggressive than what we’ve seen with Alex Jones,” with a fraction of the attention.


Simply put, that has to change. Few American communities (including the pro-life community) are better organized and more mobilizable than the gun-rights community, and it’s time to shine at least as bright a spotlight on corporate gun control as the one that illuminates governmental gun restrictions, the more traditional focus of the NRA. But not even the mighty NRA can generally force corporations to change course in the absence of government intervention. Corporations are entities that possess their own constitutional rights. Yet the NRA can seek to inform and persuade. Gun-rights proponents can invest in alternative platforms. Young conservatives can and should seek career paths in tech and other key industries to break up the monoculture.

In other words, while doing our best to make arguments in the here and now, it’s imperative for gun-rights proponents to play the corporate long game, just as they did in their remarkably successful 30-year campaign to liberalize gun laws. The ability to preserve a functioning gun industry and the free flow of information about firearms may well depend on it. Corporations have entered the fight, and gun-rights supporters are mainly on the outside, looking in.

This is not stopping at guns.  We've all heard the stories of conservatives being "shadow banned" on Twitter and having their content shut off on YouTube, Facebook and the other media.  This week David Horowitz' conservative think tank, the Freedom Center, was shut off by both Visa and MasterCard so that it becomes impossible to donate to them other than by mailing a check.  Why? The Southern Poverty Law Center convinced those banks the Freedom Center is an extremist group.  The SPLC is probably the biggest hate group in the country, with hundreds of millions of dollars in offshore accounts!

We are just this side (I think) of mortgage companies asking on an application for a house buyer whether they have guns or if they're a member of the NRA.  If they do, their mortgage is denied.  All sorts of nasty possibilities arise if the pressure can convince employers to listen to the most outraged "offended class" in their companies. 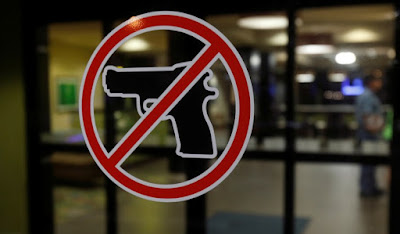 Time to take matters into our own hands.  Like Gab, full30 and the other companies that have sprung up to fight gun censorship, some banks and financial institutions are needed.