In fact it's hard to get less racist than math.  No matter who works the numbers, regardless of race, age, sex, native language; regardless of anything, anyone starting with the same problem and doing the same work gets the same answer.

Let me back up for a second.  First off, Hat Tip to Zendo Deb at 357 Magnum for "Finally the Left Admits They Want to Outlaw Math".  She links to a UK article saying "Maths Textbooks Should be Banned Because They Intimidate Students", and also to a wonderful web page "You're Not Bad At Math, You're Just Lazy", which puts a bit of a point on it.  One of the links on that page is to a 2013 article on The Atlantic, "The Myth of 'I'm Bad at Math'".


We hear it all the time. And we’ve had enough. Because we believe that the idea of “math people” is the most self-destructive idea in America today. The truth is, you probably are a math person, and by thinking otherwise, you are possibly hamstringing your own career. Worse, you may be helping to perpetuate a pernicious myth that is harming underprivileged children—the myth of inborn genetic math ability.

The thing is that this isn't a new movement, but it appears to be gathering steam.  I first heard of the Radical Math, "Social Justice Math" stuff back in 2011, and it had been going for a while by then.  Now we hear that math proficiency is somehow racist, and perpetuates the dreaded White Privilege.  Is there some genetic tendency for some people to be better at math than others?  Apparently, yes!  But solving mathematical problems properly is a skill just like shooting a basketball, and if the kids who say, "I'm just not a math person" applied the same persistence to doing math as they do to pickup basketball, or shooting 3-pointers, they'd get better at math.

As an aside, I read a book called Innumeracy (this, I think) many years ago; I think it was the late '80s.  In it, the author presents something that has stuck with me forever: in our society, it appears it's acceptable for a parent to tell a child that it's OK that they can't do math at an eighth grade level, but wouldn't dream of telling their child it was OK to not be able to read at that level.  Why do we treat numeracy so differently from literacy?

The question is: why?  Why are there attacks on math?  What does math have to do with "white privilege anyway?  There are tremendous mathematicians from all races, so why are these idiots suddenly equating math with the horror of "whiteness"?  I've used the phrase "war on competency" far less than I've thought on this blog, but I see a lot of the attacks on math as that. All out war on competency and meritocracy.

I heard an interesting viewpoint from Glenn Beck that I think bears considering.  Glenn says the left has gone past trying to sell socialism and communism to postmodernism.  His theory is that they see our society has been one of the most successful in history, and the enlightenment that sprang out of Europe giving rise to the Western world is their biggest obstacle to one world (communist) government.  Therefore, the postmodernist movement is determined to destroy the entire enlightenment and everything that flowed from that.  Math driving engineering and science is at the heart of the successes of Western society.  Since Western society must be destroyed, Math must be discredited.

Besides, if people can't do the simplest arithmetic, they can't understand the numbers that show their socialist or communist schemes can't possibly work. 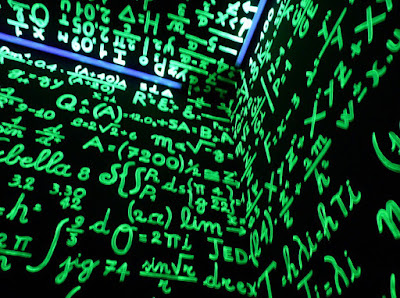 Labels: commies and other idiots, Sciencey, the big picture