The story with the most out of touch, tone deaf theme of the week concerns the young celebrity socialist Alexandria Occasional Cortex tweeting about a coffee shop she used to work closing.  What makes it so out of touch and tone deaf is that the shop is closing because of New York City implementing the exact policies that she wants to implement nationally!


Democratic socialist Alexandria Ocasio-Cortez lamented the closure of a New York City coffee shop on Monday, which is ironic considering a major factor contributing to it shutting down was because of higher minimum wage laws—a position she supports.

“The restaurant I used to work at is closing its doors. I swung by today to say hi one last time, and kid around with friends like old times,” the 28-year-old said on Twitter. “I’m a normal, working person who chose to run for office, because I believe we can have a better future. You can do it too. We all can.” 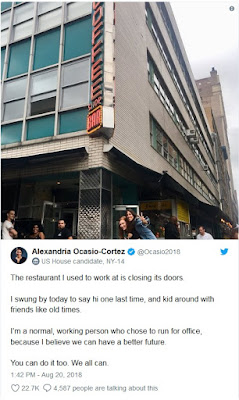 Townhall.com goes on to quote the owner of the store with a bit of important context.


The Coffee Shop in Union Square, which became especially famous after regularly appearing on HBO’s “Sex and the City,” will close down this fall after nearly 28 years in business. Co-owner and President Charles Milite announced the decision to shut the doors to its 150 employees last month.

But unlike what Ocasio-Cortez wants you to believe about the closing down, it wasn’t the result of greedy capitalists trying to squeeze the workers, but rather government regulations that forced the company to go bust.

“The times have changed in our industry,” Milite told the New York Post last month. “The rents are very high and now the minimum wage is going up and we have a huge number of employees.” (FoxNews.com)

New York City's minimum wage for fast food workers is currently $13.50, and is going up to $15.00 per hour at the first of the year (actually 12/31/18).  I'm not sure if this coffee shop counts as fast food; that would lower the current wage to $13.00 now but still increasing to $15.00/hr.  The combination of that with the costs of regulation make it impossible for a successful (28 years in business) coffee shop to continue to exist.  On her campaign website, Ocasio-Cortez calls for a $15 minimum wage:


A Federal Jobs Guarantee would create a baseline standard for employment that includes a $15 minimum wage (pegged to inflation), full healthcare, and child and sick leave for all.

According to her campaign website, Ms. Occasional Cortex has a degree in economics from Boston University.  Either she should ask for a refund from BU, or they should nullify her degree.  If BU was worth anything, they would.