Last year, Campus Reform was reporting professors saying math is racist because "algebra and geometry perpetuate privilege because 'emphasizing terms like Pythagorean theorem and pi' give the impression that math 'was largely developed by Greeks and other Europeans.'"  (Confidentially, professor Gutierrez, that's because it was).

Now we learn it's not just math.  It's Chemistry, too.  A version of the periodic table showing the nation that discovered each element, found at Daily Timewaster. 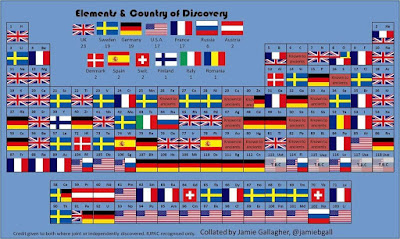 Not a single non-Western country in the chart.  About a dozen (out 118) say, "known to ancients".  Dollars to donuts that was mostly the Greeks and Romans - Europeans - but possibly Egypt.  Go ahead and credit all 12 to the Egyptians, the Mayans, Chinese or whomever you want.  The deck is still pretty stacked.