A buzz has started circulating in the ham radio community since it became apparent that in the proposed 2019 budget (summary online), the National Institute of Standards and Technology (NIST) mentioned in their proposed budget that they propose to cut:


$6.3 million supporting fundamental measurement dissemination, including the shutdown of NIST radio stations in Colorado and Hawaii

Radio stations WWV and WWVB are in Colorado while WWVH is in Hawaii.  WWV and WWVH have a lot of duplication between them, but Hawaii doesn't have an equivalent of WWVB.   Apparently, the first report on this was from a guy named Tom Witherspoon, K4SWL, who maintains The SWLing Post website; he's credited by the American Radio Relay League, the National Association for Ham Radio in their post on the subject.

The SWLing Post doesn't address WWVB, the Very Low Frequency (VLF) station and probably the most useful of the NIST services.  If you have one of the so-called "Atomic Clocks" or watches, those synchronize to WWVB.  Around our house, we're probably over 90% clocks or watches that sync to WWVB.

Comments on The SWLing Post seem to show the majority are in favor of keeping the time and frequency stations on the air, which I expect.  In reality, it's hard to conclude that they're really at risk.  First off, there are five frequencies: 2.5, 5, 10, 15, and 20 MHz on the air 24/7 at each location.  Prudence would dictate that if the designers intended to be on the air with over 99% availability that the stations would either have redundant transmitters or the ability to put a spare transmitter on the air quickly.  Could they be talking about cutting back the numbers of transmitters, the numbers of towers, or perhaps getting the realization of some actions already taken to improve reliability and reduce cost?  These sorts of details are simply not visible online.

NIST has some online photos and information on the stations.  There's a great deal of hardware there, exactly what they plan to eliminate to save money isn't clear.

It's also possible that someone in the NIST is playing some form of "Art of the Deal" and proposing this to get public outcry against budget cuts. 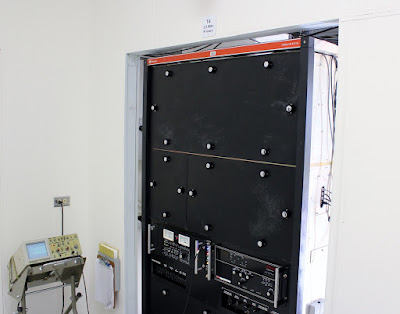 The sign at the top says it's the Primary transmitter for the 2.5 MHz station, which automatically implies at least a secondary transmitter.  It's also a fairly recent vintage Rockwell Collins commercial High Frequency transmitter; I don't know the model number, but the color scheme of that orange stripe with the rest black dates as being post 2006.  It's not like this is a 1950s vintage transmitter hand built by the NIST (which was the NBS back then - the National Bureau of Standards).

So are WWV/WWVH going away?  I'm afraid I can't answer that either way.  It seems that something might be set to happen, but I can't track down enough details to say for sure.  There are other HF time/frequency standard stations, the main drawback is that their signals are going to be quite a bit weaker and less available in the mainland US.  The station with the most utility appears to be their VLF station, WWVB.  Since it has become so widely used commercially, it seems least likely to be affected, but that's just a guess.   Does anyone know any more?  Drjim, you're practically in their near field; heard anything?