The Negative Impact of the #MeToo Movement

That's the title of an interesting piece from Heather MacDonald of the Manhattan Institute, writing in Imprimis, the online magazine of Hillsdale College.  It's a long piece and an interesting read, so as usual, I'll recommend you read the whole thing.  I also think she misses some things so I'll quote some of what she says and comment on what I think she gets wrong.


Our nation is about to be transformed, thanks to the #MeToo movement. I am not speaking about a cessation of sexual predation in the workplace. If that were the only consequence of #MeToo, the movement would clearly be a force for good. Unfortunately, its effects are going to be more sweeping and destructive. #MeToo is going to unleash a new torrent of gender and race quotas throughout the economy and culture, on the theory that all disparities in employment and institutional representation are due to harassment and bias. The resulting distortions of decision-making will be largely invisible; we will usually not know of the superior candidates for a job who were passed over in the drive for gender parity. But the net consequence will be a loss of American competitiveness and scientific achievement.

And this is like a topic sentence to the entire piece.  Ms. MacDonald talks a lot about the distortions that are coming due to this, but puts it in terms familiar to us.


Pressures for so-called diversity, defined reductively by gonads and melanin, are of course nothing new. Since the 1990s, every mainstream institution has lived in terror of three lethal words: “all white male,” an epithet capable of producing paroxysms of self-abasement.
...
But however pervasive the diversity imperative was before, the #MeToo movement is going to make the previous three decades look like a golden age of meritocracy. No mainstream institution will hire, promote, or compensate without an exquisite calculation of gender and race ratios. Males in general, and white males in particular, will have to clear a very high bar in order to justify further deferring that halcyon moment of gender equity.

From here, MacDonald goes into a litany of examples, from fashion giant H&M, criticized for having a board that's "too white", to show business, the Academy awards, classical music, TV news, book publishing, banks and finance institutions, and to silicon valley.

It's nothing short of an all out war on competency and meritocracy as the basis of hiring.


Audrey Pool O’Neal, the director of UCLA’s Women in Engineering program, justified this sinecure with the usual role model argument for gender- and race-conscious decision-making. “Female students let me know how much they appreciate seeing a woman of color in front of their classroom,” she told the UCLA student newspaper.

Why not appreciate seeing the most qualified scholar in front of your classroom? Any female student who thinks she needs a female professor in order to envision a scientific career has declared herself a follower rather than a pioneer—and a follower based on a characteristic that is irrelevant to intellectual achievement. Marie Curie did not need female role models to investigate radioactivity. She was motivated by a passion to understand the world. That should be reason enough for anyone to plunge headlong into the search for knowledge.

She spends quite a bit of time on this subject, talking about the James Damore incident at Google, including information I haven't seen before.


In August 2017, Google fired computer engineer James Damore for writing a memo suggesting that the lack of 50-50 gender proportionality at Google and other tech firms may not be due to bias, but rather to different career predilections on the part of males and females. He cited psychological research establishing that on average, males and females are attracted to different types of work: males to more abstract, idea-centered work, females to more human-centered, relational activities. Damore was not disparaging the scientific skills of the female engineers working at Google; he was trying to explain why there were not more of them. Nevertheless, Google accused Damore of using harmful gender stereotypes that put Google’s female employees at risk of some unspecified trauma.

Definitely worth the read.

Where I think she's missing things is in two places.  To begin with, these issues in hiring aren't that new and therefore aren't specifically from the #MeToo issue; this fire started a few months ago.  For at least the last few years it has been becoming apparent that white men shouldn't apply to work in Fortune 500 companies.  You'll be passed over for every important promotion, if you even get in the door past a less qualified minority that's applying for the same spot.  My last job was in a Fortune 500 company and diversity, "defined reductively by gonads and melanin" as she says, was our gospel.  As I noted in 2011,


I can't help but feel like they're going about it all wrong;  they emphasize what we look like, or what we eat, not who we are.  ... Diversity isn't white guys and Indian guys or "smart Latinas": it's engineers and art majors.  .

The second thing she doesn't address is a response that was whispered about in the immediate aftermath of the first explosion of #MeToo: startups and small companies will refuse to hire women.  If anything one says can be interpreted as threatening and lead to legal troubles, why would anyone take the chance?  It's already a problem for startups when they have to hire outside their circle of friends and people they used to work with.  An alternative is that when the startup gets big enough to need to hire more employees, they contract with a Professional Employment Organization, or PEO (think of old companies like Manpower or Kelly Services).  There are no employees, just contracted services that can be terminated instantly at will.

This is just more pressure on full time work.  I've been saying for years that the continuing expansion of regulations is making full time employment less likely for more people, which means more and more people will be contract employees and more people will gravitate to small businesses.  I can envision large companies, call it Fortune 500 companies, with some small percentage of the work force actually being full time, permanent employees and the vast majority of workers being  contractors.  The regulatory load being put on companies is getting so odious that the companies respond by not hiring full time employees any more, hiring only contract workers. 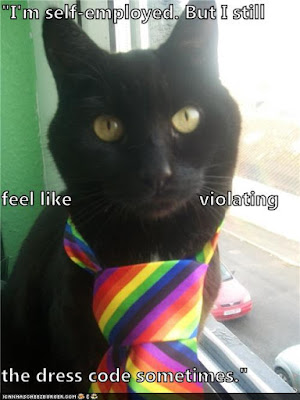