171,000 Manufacturing Jobs "Reshored" to the US Last Year

In a report released by the Reshoring Initiative called its 2017 Reshoring Report, the group shows data on U.S. reshoring and foreign direct investment (FDI) by companies that have shifted production or sourcing from offshore to the US.  According to Design News:

It seems that the first mention of the word "reshoring" in this blog as back on February 12, 2013, so I've been following this trend at least since then (it links to an article here a year earlier).  The Reshoring Initiative (RI) includes data going back to 2007.  The factors involved in the decision to produce something offshore or here are wide ranging.  In the report, they question companies for the reasons of moving back (or investing in the US).  RI then ranked those reasons from 1 to 23 as factors against offshoring and factors favoring reshoring. 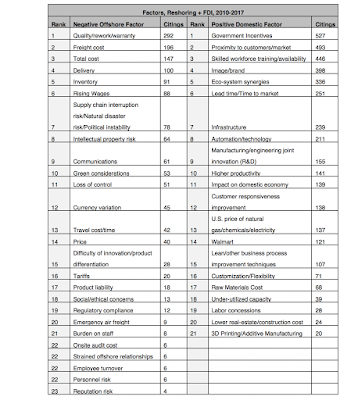 They're all instructive, but the top few are the ones that the most survey respondents cited.  292 respondents said that the quality of the imported goods combined with the amount of warranty cost and the cost of the rework they had to do to make the products usable was the biggest disadvantage.  The top five disadvantages were that, freight cost to ship goods to the US, the total cost, delivery and inventory problems.   The top reason for reshoring to the US was government incentives to move back, but that barely edged out the next two reasons: proximity to the customers and the availability of a skilled workforce and training for them.  Rounding out the top five were brand image (a desire to say "Made in the USA" to look better) and "eco-system synergies".  I have no idea what they mean by that, but it's generally a good idea to beware of people saying things like that.

Also, note how the numbers on the right column are greater than 100 much farther down the chart than the left column, and how the right column has bigger numbers in general.  It's a rather unified group of respondents.

RI noted that one of the reasons jobs are returning is that the cost differential between home-produced goods and landed goods from overseas has been shrinking for years. RI founder Harry Moser said:


“We know where the imports are by country, and we know the price difference between the foreign price and the US price. The total cost of foreign-made goods delivered to the US is a full 95% of the cost of US-produced goods,” said Moser. “We know how much you have to shift it to make the US competitive with China.”

Those who haven't worked in manufacturing probably don't understand how intense the pressure is to always do more with less.  In manufacturing, time is money and getting the job done right with minimal waste, and then always getting better is the mantra.  Maybe because of that, managers chase fads that promise better performance or lower costs.  The cost advantages of going offshore have to be much bigger than they are to overcome that column of reasons not to offshore. 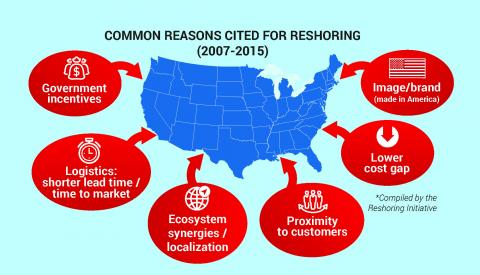