Thanks to commenter Ratus to yesterday's post about YouTube, a picture seems to emerge to me.  Ratus points out that Chris Bartocci, of the Small Arms Solutions Channel has been a victim of YouTube. Chris writes:


On March 23rd we received our first strike on YouTube for our Caracal CAR816 A2 video. Someone in the comments section said they were reporting the video for "promotion of terrorism" because Caracal's main hub is in the UAE. Obviously, it could not be deemed as any such promotion of terrorism and it has been appealed. However, more than 2 weeks later and we have not heard anything. Then on April 1st we received our 2nd strike for a video that was posted months ago on the Glock 19x for "violence". Again, that has been appealed. Because of the 2nd strike they will not allow us to post on YouTube for two weeks.

Chris goes on to say he's in the process of moving all of his video content to other platforms:  GunStreamer.com, DailyMotion.com, and BitChute.com.

In the 1980s, I read a book called, The Media Lab (long out of print), about the institution at MIT by that name.  The book introduced me to the concept of narrowcasting, in direct (deliberate) contrast to the idea of broadcasting that everyone grew up with from the dawn of TV until the mid-90s or so.  Narrowcasting is just that: aiming your TV program (and the advertising that sponsors it) to a narrow audience, and not trying to reach the entire country.

In the era of hundreds of TV channels, the idea is obvious; it was less obvious in the '80s.  Programming like that found on the Outdoor Channel or World Fishing Network, to name a couple, will never have an audience the size as the major networks get for their big shows.  Last week, for example, the top rated show on the networks was the rebooted Roseanne series with 13.8 million viewers, while the last of the top 25 drew 5.9 million viewers.  It's difficult to get these numbers for shows on the small networks because they're so small, but I think tens of thousands instead of millions.

What made YouTube worth hanging out on was the variety of content.  I have 25 videos on YouTube; 16 are related to converting my milling machine to CNC, and of the other 9, two are gun related and the rest are videos from Cabin Fever Expo trip in '15.  Now, if I want to watch videos on a new machining tool or technique, I'll go there; to learn how to clean my new gun I'll have to go somewhere else. 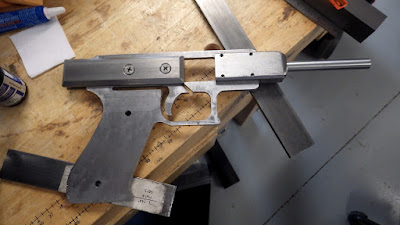 My built up GB-22 (last year).  Mark Serbu's videos of his were still online last night.