Where (This) Man Has Never Gone Before

A cursory search shows that I've never mentioned on this blog that I used to make telescopes, including a few reflecting telescopes from grinding the mirror through building the mount and building a small refracting telescope from a copier lens (I have explained mirror making in one of my patented absurd analogies, though).  Telescope Making became a national hobby in the early part of the 20th century, led by a group of machinists at home in Springfield, Vermont.  The first telescope maker's conventions were (and still are) held in a place called Stellafane in Springfield.

While I haven't built one in a while (this place looks like a used telescope store), I'm still interested in astronomy, telescopes and the tech.  This week, I came across something I've never seen before.  Ultrascope from the Open Space Agency is an open source, small reflecting telescope, designed to be put together with a minimal amount of specialized knowledge, but assuming the builder has a 3D printer available and access to other "modern tech", like smart phones and a good internet connection.


Ultrascope is an open source robot telescope or ARO (Automated Robotic Observatory) controlled by a smartphone. It empowers citizen scientists with a low cost and open source robotic telescope to assist the work of professional astronomers. 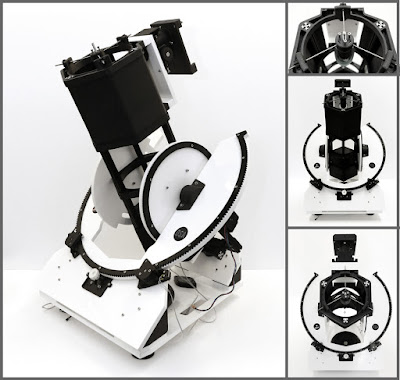 If you're not from the astronomy world, I'm betting you've never seen a telescope mounted like this.  This is called a split ring equatorial mount and is a very stable design, originally designed by one of those Stellafane telescope makers for the 200 inch reflector on Mount Palomar in southern California: the largest telescope in the world for about half a century.  The way that this mount is oriented (in the left panel) we're looking at it from the southeast, so the plane of the ring the telescope sets in forms an angle to the horizontal equal to the latitude of the observing site.

The scope is optically small: a 6" mirror with a focal length that looks to be about 36" (squinting while looking at various pieces, comparing sizes and guessing).  Therefore, it looks like an ambitious project for someone working on their own with no expert assistance, and who buys a professionally made mirror.  6" was the size of the first mirror I ground from flat glass and for a couple of generations, the standard beginner's telescope mirror to grind was a 6" mirror with a 48" focal length.  Like camera lenses, longer focal lengths lend themselves to higher power and shorter focal lengths toward wider angles.

The game here is a that this is a Robotic Observatory, to search for asteroids as a collaborative astronomy project.  The connectivity and programmability comes from an Arduino Mega processor, and the drive motors are controlled by a shield board that plugs into the Arduino Mega.  Because it's intended for robotic survey use, it's not designed for an eyepiece, but rather to use a smartphone camera as the eyepiece.  This video shows the scope in overview.


All in all, an interesting looking little project.  It's not strictly for astronomers, because they envision someone building it and then setting it up to work autonomously.  Builders aren't expected to sit out all night with it, but would need to do things like find how to focus the image, and operate the controls.  Final words to the Open Space Agency.


If you’re a maker, DIY Engineer, citizen scientist or just a long-time aspiring astronaut with stars in your eyes, then we’d love to hear from you.