What do all those names have in common?

The story of Alfie Evans in the UK is another one of those "unless you've been living under a rock" stories.  It needs no introduction, but perhaps a summary.  The British National Health Service is insisting that Alfie be allowed to die with dignity - although reports from people who have seen the room say they're not even allowing him to live with dignity.  Stories and photos come back  showing the hospital staff leaves him to sleep in urine, and that mold grows in his breathing tubes.

Alder Hey, the hospital where Alfie lies, has a history of appalling treatment of patients.


In 1998, a heart specialist at Alder Hey accidentally revealed during an inquiry that the hospital was storing — in bulk — children’s organs. With no consent from the parents, Alder Hey Hospital was harvesting the organs from dead babies.

They were also caught selling human tissue to pharmaceutical companies in exchange for cash donations, but what they didn’t sell, they stockpiled. Alder Hey had 2,080 children’s hearts, over 800 other organs, and 400 full fetuses. A pathologist at Alder Hey was even accused of keeping the head of a baby stored in a jar. NONE of this was done with parental consent.

Now the hospital is not only denying Alfie medical care, they won’t let his parents take him home to die and say it's because the protests show the parents have a bad attitude.  Merseyside (city) Police threatened people who posted opinions that disagreed with the government.  Spokesmen for Alder Hey hospital are now saying that unless his parents have a “sea change in attitude,” they won’t allow Alfie to go home.  This week, Alfie was taken off life support and defied expectations by breathing on his own.  It took the hospital most of a day to decide to give the child water.

Last July, in a similar case, the UK government insisted that Charlie Gard die - it's too euphemistic to say they allowed him to die, it wasn't that passive - and denied the parents visitation to be with Charlie when he died. After a lengthy struggle to try to save the child, he was transferred to a hospice, taken off his respirator, and quickly died.

It's important to recognize that neither case is about the cost of treatment.  In both cases, outside sources are guaranteeing funding and offering to coordinate the treatment.  In Charlie Gard's case there was a crowdfunding effort that gathered funds and an American researcher who thought Charlie might be treatable.  In Alfie's case, the Italian government has granted him Italian citizenship and has offered him treatment there.  Additionally, Pope Francis has offered to intervene, leaving an aircraft in the UK to take Alfie to Italy.

The cases are about the governments ability to decide who lives and who dies.  Like the saying about gun control goes, it's about control.

This shouldn't be a surprise; the UK enacted the Liverpool Pathway over 6 years ago.  The Pathway was a treatment protocol to kill off the elderly, primarily by depriving them of water and food, although there were allegations it was used on children.  Hospitals paid millions to reach their goal numbers of elderly patients "allowed" to die on the program (I hear the Mafia pays to get rid of people, too), and there have been many stories of complaints by relatives of how awfully their parents were treated. It's a system that a prominent oncologist called "immoral medicine" and "the most corrupt practice in British Medicine".  We shouldn't be surprised they'd yank treatment from the youngest.  Killing off the young as well as the old is a natural consequence of systems like the UK's.

The same ideas are encoded into the laws of Obamacare.  This is what the media buzz about "death panels" was about back before Obamacare was passed.  The Complete Lives System, which came from a paper co-written by Chicago Mayor and former Obama Chief of Staff Rahm Emanuel's brother Dr. Ezekiel Emanuel.  The guy who said that he hoped to die by 75 and thought that was the right way to run a healthcare system.  The concept is most easily explained with a graph (pdf warning). 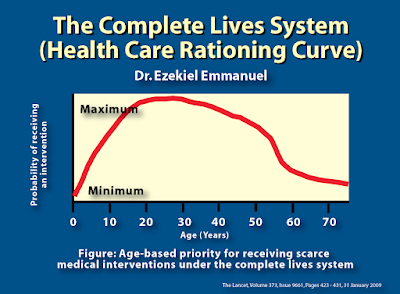 It's based on the ability of the patient to repay society for the cost of the treatment.  An infant like Alfie won't be in a position to pay back taxes for at least 20 years, so they get the lowest priority of treatment of any age group.  Let them die.  Someone over 60 might be able to pay back to society, but the chances they'll pay it back in taxes get lower the farther into retirement they go.

For a concrete example, consider someone needing a kidney transplant and we'll make up that one is 30, one is 5 and one is 70.  A 30 year old working a good job has the best chance of getting one.  Heck, yank one of out of a 10 or 12 year old in for something else and get that 30 year old back to work!  The 5 year old or the 70 year old probably isn't going to be getting a kidney unless one happens to be available.

I've met people who defend socialized medicine; I'm sure you have, too.  In cases like this, the usual response is to talk to us like we're retards who can't grasp that there's always some sort of healthcare rationing going on and that the experts of the NHS know best.  There's tons wrong with the way health care is done in the US, but I've never read one thing about the NHS that made me say, "I have got to get me some of that!"