A team of researchers has developed a line of tiny monitoring machines that can be used for environmental monitoring, the Internet of Things That Don't Quite Work, or for medical monitoring.

“You can make electronic circuits that are a single atom thick,” [research leader, Dr. Michael] Strano says. “One creative use no one has thought of until now is taking these electronics and grafting them onto a colloidal particle.” Colloidal particles are microscopic solid particles suspended in a fluid. Colloids are small enough to use thermal energy Ve [voltage] and achieve equilibrium with the suspending fluid. They are also large enough that their positions and motions can be measured precisely using optical methods, such as light scattering and laser-scanning confocal fluorescence microscopy. The particle has simple computing functions that can be monitored for data collection and feedback.

The research team predicts that these micro-machines will be used to monitor large areas for bacteria or spores, or even smoke, dust, and toxic fumes. By introducing the concept of an aerosolizable electronic device, one can achieve a significant cost savings compared to other satellite or drone search alternatives. [Note: anything in square brackets has been added by me - SiG] 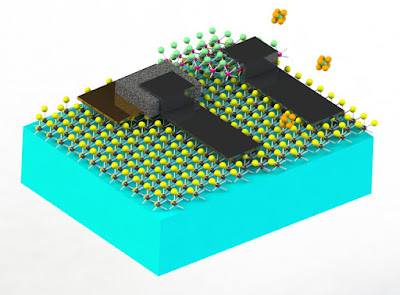 This diagram shows something that goes beyond "microscopic" to "molecular-sized".  Those free-floating yellow/blue things on the right are molecules, as are the most of the features.  The tiny size has the problem that not much computing power can be put in that size; it detects what it's looking for and changes the state of something that can be detected.  Computers aren't going to be getting much smaller than they are now anytime soon, due to hitting quantum limits, and nobody really knowing if quantum computation can actually work.

The researchers, led by Volodymyr Koman, Ph.D., a research fellow in Strano’s group, simulated objects this size floating in a natural gas pipeline (certainly anything this size can be suspended in a moving gas indefinitely).  They were able to detect the presence of carbon particulates or volatile organic compounds in the chamber, and successfully store that data within its memory.  This is only representing 1 bit of memory.  Found it Yes or found it No.

But gas pipelines aren't the same as injecting into people, and that area is still speculation.  The team  developed a biocompatible set of electronic components for the particle’s coating to form an electronic circuit consisting of a power source, a detector, and a memory device.  They then aerosolized them and propelled them toward a target in an effort to see how far they could be sent. They found the particles were able to fly a couple of feet.


The next step is to develop particles for specific applications. This includes monitoring applications in the human digestive system. “This is the right idea and the right time,” says Strano. “Think of these as proto-robots.”

This idea has been floating out in the "idea universe" for a while now, and I see I've done a few pieces on it (such as this).  Lots of teams are working on it, but this MIT team doesn't appear to be leading or doing things that nobody has done.  Injectable robots are coming, but not this year.