The American Society of Mechanical Engineers has put out a list of what it regards as nine of the most important milestones in American Manufacturing and Engineering.  Most date from 19th and early 20th centuries.  The list, at Machine Design, is interesting in the number of inventions related to firearms.

The first entry in the list defies that categorization of 19th and 20th centuries, dating to 1794 in the18th.  We're talking, of course, about Springfield Armory. 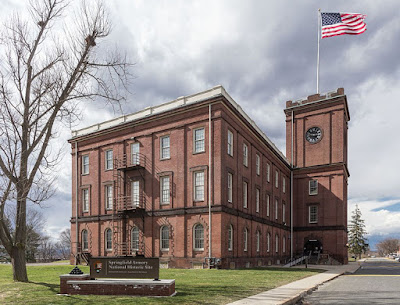 
To supply his Continental Army with weapons, George Washington helped form the U.S.’s first national armory in Springfield, Mass. It supplied weapons for every war the U.S. fought when it was operational, which was until 1968. It also ushered in a host of machine tool innovations, including the Blanchard lathe, which could duplicate irregularly shaped parts such as wooden gun stocks. Rather than relying on a workshop full of carvers, it could reproduce a dozen exact copies simultaneously. Interchangeable parts were also partially developed there, as well as a set of precision gauges which contributed to manufacturing standards. One of the most famous of the many weapons designed and built there includes the Garand M-1. More than 5.5 million were built and used during WWII and the Korean conflict. And between 1939 and 1945, the time needed to make one was slashed by 75%

The innovations from the Springfield Armory fed number three on the list, Robbins & Lawrence Machine Shop (1846).


Robbins and Lawrence took information developed and maintained at the Springfield Armory, and were the first to master the skills needed to design and make rifles which used interchangeable parts. Parts from any rifle could be used in another rifle of the same model and replacement parts could be made for it. This let the two machinists fulfill a contract for 25,000 U.S. Army rifles (Model 1841). They delivered a similar number of the same rifles to the British. This was made possible by improving and refining standard and special-purpose machine tools, letting them deliver the tolerances needed for repeatability and, therefore, interchangeability. The two also made such good use of milling machines and turret lathes that they are now common in manufacturing.

It's hard to overstate just how important the development of interchangeable, standardized parts is to manufacturing things - as well as later fixing them.  That it began with guns hints at the importance they play in life.  Standardized parts leads to something that the world just couldn't do without.

If every screw has to be handmade, that makes them little pieces of jewelry that you dare not misplace or put in the wrong place.  In Alexander Rose's "American Rifle: A Biography" he tells the story of an industrial show in Europe in the latter part of the 1800s, in which an American company brought rifles with interchangeable parts and shocked the European attendees to their core. 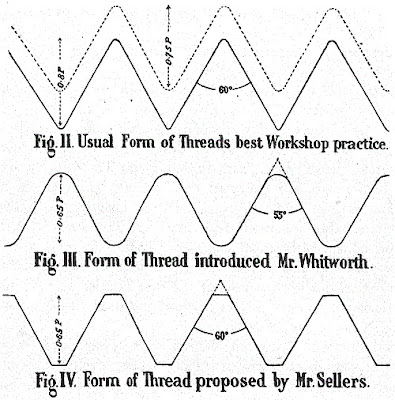 Prior to 1870 or so, there were no standards for screws in the U.S., which made it difficult and expensive to find replacements. Inspired by Joseph Whitworth’s efforts to address the same problem in Britain, Philadelphia’s William Sellers decided to do the same in the U.S. So in 1864, he created a standard for screws and threads adapted for U.S. needs. For example, thread profiles were 60 deg., not 55, which simplified things for machinists and mechanics. He also thoughtfully defined pitch (threads per inch), form, and depth, as well as proportioning hex nuts for bolts from ¼ to 6 inches in diameter. By the 1880s, his standard was widespread in the U.S., letting manufacturers from coast to coast know the same fasteners would be available everywhere—a major step towards interchangeable parts for everything from typewriters to locomotives.

Well, I shouldn't excerpt the entire article, so just the three that mean the most to me.  Threading, in particular, is a fundamental machining operation that is deceptively simple.  For most uses, it is simple: a tap or a die is all you need.  There are families of threads (pdf), classes of threads, and getting the wrong thread someplace can be a major problem.

To butcher the Isaac Newton quote, "If we have gotten farther, it is by standing on the shoulders of giants".