A couple of weeks ago, there was buzz about one of Uber's autonomous (self-driving) cars being involved in an accident in Tempe, Arizona, and the company halting all autonomous car trials.  I had not heard that this halt was only in place for three days. Not quite just overnight, but it didn't take Uber long to conclude there's nothing wrong with their technology. 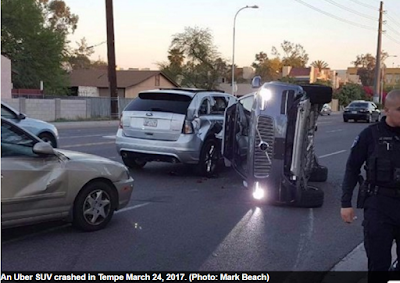 According to the reports:


Josie Montenegro, a spokeswoman for the Tempe Police Department, told Reuters that the accident occurred when the driver of a second vehicle "failed to yield" to the Uber vehicle while making a turn. She added, "The vehicles collided, causing the autonomous vehicle to roll onto its side.”

Considering the novelty of autonomous cars, it's easy to dismiss this as an accident caused by a human-driven car; drivers have most of their collisions at intersections, and especially turning left.  Given the hype of the safety promises made by the promoters of self-driving cars, it's easy to conclude that Uber’s robo-car, loaded with crash-preventive sensors, proved itself defenseless in the face of an ill-timed maneuver by a careless human driver.

If you're like me, though, you're saying  “How did the Volvo end up on its side pointing in the opposite direction?”  I've been hit a time or two, and even in an SUV with warning labels that make you think it's a dog yearning to "roll over and play dead", I've never ended up on the car's side.  What kind of speeds were involved in the collision?   Mike Demler, senior analyst at The Linley Group, goes further, asking: where was the Uber SUV (Volvo) exactly hit?  The kicker is either nobody knows or nobody is saying.


Strategy Analytics’ Riches asked, “Was the outcome of the crash (Uber vehicle on its side) inevitable given the impact? Or were there post-collision autonomous manipulations of throttle/brake/steering on the Uber vehicle which made things worse (or better, for that matter)?”

Demler also raised similar questions to Uber. “Did the self-driving system respond at all?  Did it abruptly steer or brake? Perhaps the way the Volvo reacted caused the roll over? The lack of damage to the Ford indicates to me it wasn’t traveling at high speed, so what caused the rollover?”

Although Uber hasn't been forthcoming with the contents of the "black box" records in the car, the Tempe police department has been a bit more helpful; it just took a couple of days.


First, the driver who hit Uber’s Volvo was in the intersection waiting to turn left and was therefore moving slowly. She wasn’t exactly making a sudden, reckless move.

Second, Uber’s Volvo, in self-driving mode, was moving at 38 mph in a 40 mph zone and failed to detect the left-turning vehicle. Further, although the Uber’s driver remembers the traffic light changing to yellow when his car entered the intersection, the Uber Volvo didn’t react, neither hurrying nor hesitating. [Bold added - SiG]

This doesn't seem consistent with the Volvo lying on its side facing the opposite way.   The accident report explains:

After being struck, the Uber Volvo collided with a traffic signal pole, then flipped on its side and collided with Vehicle #3 (Hyundai EST) and Vehicle #4 (Ford Edge), which were stopped in traffic southbound in Lane 2 of S. McClintock Dr.
...
Demler summed up: “To clarify — the Uber Volvo proceeded through the intersection after being hit on its driver side by the left-turning Honda CRV. This is documented in the police report drawing, which shows the Volvo’s trajectory after the collision. The CRV stopped there. As the CRV driver said, she was in the intersection waiting to make her left turn, so wasn’t moving very fast when she came across the stalled left and middle lanes, and then hit the Volvo moving at a much higher speed through the rightmost lane. Had the CRV been traveling at a higher speed, it is unlikely the Volvo could have proceeded South on McClintock on a trajectory that resulted in it colliding sideways with the light pole on the opposite street corner.”

As I'm sure you know, in a situation like this, the driver turning left will be cited for failure to yield the right of way and will be written off by the techies as the "careless human" that messed up the autonomous car.  In reality, it sounds like the car driver did far more to avoid the accident than the "sooper intelligent" self-driving car.

My conclusion is that this accident makes the Uber cars sound bad.  About as bad as the Tesla that couldn't tell the sky from the side of semi-trailer and decapitated its driver.  Both of these accidents make me think any reasonably competent human driver would have done better.  The driver in the Honda CRV was driving prudently, she just wasn't driving prudently enough (they're called accidents for a reason).  The Uber Volvo (which sounds like a comic book hero) went unabated through an intersection where several "caution flags" would be apparent to anyone who has had the least bit of defensive driving training.  Mike Demler put it this way:


Demler would like to ask Uber, “Why did your vehicle proceed through the intersection at 38 mph when you could see that traffic had come to a complete stop in the middle and leftmost lanes? What action did the Volvo’s self-driving system take once it recognized a collision was imminent… or didn’t it recognize it at all?  Did the Volvo brake after the collision? That would have been the proper procedure, since the CRV had screeched to a halt, and traffic ahead was stopped.”

I would add that at least in Florida, not stopping after you've been hit is a criminal offense, "leaving the scene of an accident".  If the Uber car didn't brake after the collision, that's some software that needs to be fixed.