The Greening of America

As in grass - marijuana.  Last November, five more states voted to legalize marijuana outright.  Here in Florida, we joined the states with legalization of medical marijuana.  Now 29 states and Washington, D.C., allow you to use marijuana either recreationally or for medical purposes.  Conceivably, with the way the trend is going, it’s only a matter of time before the rest of the country follows suit and marijuana is fully legalized.  Assuming all the states that have passed these laws would vote for a constitutional amendment, the marijuana lobby is short just four states.

According to one poll I saw referenced, 60% of Americans already think that the federal government should legalize marijuana outright.  In 1995, that number was 25%. A Quinnipiac University poll showed more than 90% of respondents think medical marijuana should be legal at the national level.

Given all that, I think this cartoon is only missing one character.  Lawyers. 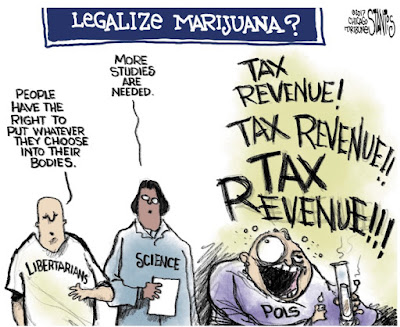 Florida's medical marijuana campaign was (apparently) led by an AKC registered ambulance chasing lawyer from Orlando named John Morgan.  Morgan also bankrolled the previous attempts to amend the state's constitution, and well over a year before November's victory, Morgan was already describing the business windfall that legalization was going to bring. Who better to advise businesses setting up to provide marijuana about how to navigate the new laws than an experienced lawyer, right?

It was long rumored that the real money isn't in ambulance chasing, it's in controlling the marijuana infrastructure, and that's what he's been angling for.  He's now floating an exploratory effort to evaluate running for governor (the website is supposedly the effort of an independent friend, not Morgan himself).  Although the amendment went into effect on January 3rd, there is no marijuana industry in Florida, and the state Department of Health is saying they may have the rules defined by July.  The next governor is going to control the distribution scheme and John Morgan seems to be betting it just might be him.  A potential problem for Morgan is that he has famously backed many Democratic causes, and Florida has been more red than blue in the governor's mansion despite the influx of blue state refugees from the Northeast that the state is known for.

The North American marijuana industry is already a $7 billion market.  Bank of America Merrill Lynch says it could be a $35 billion market by 2020 and Investment bank the Cowen Group projects the market will be worth $50 billion a decade from now in 2027.   Marijuana can be invested in through publicly traded companies.  Bonner and Partners presented this graph this week, showing four small Canadian marijuana stocks which are all up at least 270% over the past year. Two of them are up by more than 400%. 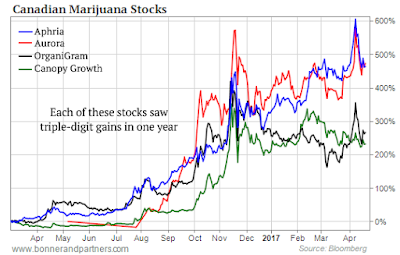 What seems to be a good list of US marijuana stocks is here.

Disclaimer: I detest John Morgan's commercials and that industry he represents (ambulance chasing, not marijuana)  That personal dislike may have permeated this piece.