A Different Economic View of Markets and Command Systems

Many of you will have noticed that I quote Bill Bonner in this space fairly often, and get his Diary every day.  I even read it, most days.

It's apparent from his writings that Bill has become an advocate of the Information Theory of Money, advanced by writers like George Gilder, as have I.  He also has been developing an idea lately that is sounding more and more like truth to me the more I chew on it.  I thought I'd share it.

Let's start this way: the free market, when it exists in its most unfettered forms has an extremely important and good aspect.  Both parties to a deal think they got a good deal; in fact, both parties think they got the better of the deal. Examples are everywhere.  I have a used car to sell and you need a car.  Let's say I sell you my car for $5000.  You think you're getting more utility out of the car, and I think I'm getting more utility out of the $5000.  For another example, perhaps you set up a refrigerated ice chest at public boat ramps, selling cold drinks to guys coming off the water.  Perhaps you charge quite a bit more than what that soda would cost by the 12 pack at the grocery store, but just a little more than the convenience store down the road.  You're happy to make money on the soda you bought by the 12 pack at the grocery store while the boaters are happy to have the convenience of a cold one right then and there instead of having to make a stop at the store.

These are win-win transactions.  Both parties are satisfied and either one could have called it off before the transaction was completed with nothing lost.

On the other hand, there are transactions where one party wins and the other loses.  Win-lose transactions are commonplace.  Consider having your wallet stolen, or you credit card number stolen online.  You lose and the thief wins.  In the second case, the issuing bank for the card will also lose some.  From a win-lose standpoint, taxation is not usually distinguishable from theft.  You pay taxes which go to a project in a congressional district on the other side of the country, or taxes which go to an organization that does something you find detestable, whether that's build an atomic bomb or sell aborted baby parts.  Did you win or lose?  If you don't pay the taxes, you likely end up in jail, if not worse, which is losing big time.

We could go into a separate discussion of wealth, but for now let's keep in mind that perhaps we don't strictly mean monetary wealth, but could be referring to a generic satisfaction or happiness.  Under the "when you have a hammer, every problem looks like a nail" axiom, modern economists like the voodoo practitioners at the Federal Reserve and other central banks can only measure things they can count.  As Bill Bonner says: economists can measure wealth. They can’t measure satisfaction.

Getting back to the equation, it really says the only way society gets wealthier and happier is for there to be more win-win deals than win-lose deals.  The only way the wealth of the nation grows is for that to happen.  Furthermore, let's say Trump gets his "trillion dollar infrastructure program" funded.  Is that win-win or win-lose?  Certainly some of the people who pay for it won't get anything for their tax money.  It's win-lose to them.  If someone does pay a few hundred (or thousand) in taxes as "their portion" of a bridge or road and they get much more benefit (traffic to their business, for example) they get a win-win deal.  The companies who build the infrastructure definitely win.  The equation, though, talks about the benefit to everyone: the economy as a whole.

So what if there are more jobs in the Rust Belt if they come at the cost of job losses elsewhere… or price hikes… or higher taxes?  So what if Trump reduces the imports into America if everyone's standard of living goes down because they can't afford to buy the replacement goods.  As a rule, any transaction that benefits the cronies and insiders who suck off the government (or who are the government) is going to be win-lose, not win-win.

Now think of the Fed's quantitative easing; creating money out of thin air.  Did wealth go up?  Not by this equation.  All they created was numbers in a computer.  They moved those numbers around on the balance sheets of some Too Big To Fail banks and other cronies.  There's no wealth creation there.  How could government deficit spending possibly increase wealth?  All does is take money from one group for transfer to another; a win-lose deal.

I think Bill Bonner is on to something here.  As he says, "it's so brilliant and simple, I can't believe I didn't steal it from someone.  Maybe I did and don't recall". 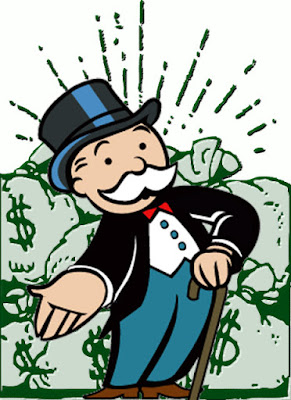