After Yesterday, Do You Want to Fly United?

By now, everyone has likely seen the pictures of a passenger being hauled bodily off an overbooked United flight, after the Chicago Department of Aviation security officer smashed his face onto a seat arm and bloodied him. 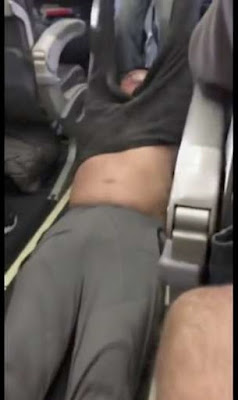 (Here, I've edited out the center of the photo by Audra D. Bridges from SFGATE )  The flight was a short hop, from Chicago O'Hare to Louisville, Kentucky.  The passenger, whose identity has not been released, was returning from a quick trip to Japan to see the cherry blossoms, and was saying that he's a doctor who was scheduled to see patients this morning so he couldn't voluntarily give up his seat.  United overbooked the flight, and here's the kicker, was going to need four seats to fly a United crew to Louisville.  That's right, they were giving up paying seats and paying a premium to anyone who took the offer so that they could fly staff.  Poor planning, anyone?

The root cause here is an antiquated process the airlines used called overbooking, which means exactly what it sounds like.  Airlines used to have a problem with under-utilization of the aircraft; people who buy a seat but don't show up.  I suppose in some halcyon old days, there were ways to get a refund if someone didn't use the seat, but I'm rather certain those days are long gone.  I know every time I've gone shopping for tickets for a flight, they tell you it's a non-refundable seat.  It's the cheapest.  You can pay more for a refundable seat.


At 5:40 p.m., a flight attendant requested four volunteers to give up their seats in exchange for $400 each.

“No one wanted to take the voucher because they told us the next flight would be at 2 pm the next day,” [Tyler] Bridges, a civil engineer, told The Chronicle.

Again, once or twice in my travels I've been given an offer like that, but only on the way out; when not showing up would cost me hotel fare for the night, and a rental car expense.  Never on the way home, when I generally have the flexibility to be delayed a day.  As the day has gone by and everyone has reported on this story, I've heard stories of cases others say they witnessed, including Delta giving a family of three $1350 each for their seats, paying for a hotel room and transportation - roughly $4300.  I'd take that offer even on the way out, if it didn't impact anyone I was going to meet.

The problem here has a couple of aspects.  First: the whole antiquated overbooking phenomenon.  In what other venue can you buy a product, pay for it, and be denied it?  If you buy a flat screen TV and walk it out to your car, Walmart can't come up to you and take it back because they also sold it to someone else.  Maybe a better analogy is sports.  People will buy a season ticket to see their favorite team and not go to the game.  Either way, there's a finite number of seats that need to be sold for a certain date.  If the buyer doesn't show up nobody else gets that seat.  They don't sell the seat to two buyers and figure "we'll deal with it if they both show up".  If you don't go, you forfeit your seat.  Why isn't airplane seat the same? Why would they overbook in the first place?  Today, they have computerized systems tracking demand for seats that tell them on a flight-by-flight, seat-by-seat basis what the demand is and adjusting the prices moment by moment.   Sell the number of seats on the plane and then stop.

The other aspect is that in the name of airline safety we've made the airlines immune to prosecution for this sort of insanity.  It's a violation of federal law to disobey the orders of the flight crew.  And that's totally ignoring TSA, Air Marshals and the rest of the security kabuki.  In the air, that has a certain sense to it.  Airplanes have a restricted set of conditions they can fly in (their "envelope"), and someone has to be in command.  If the pilot tells the passengers to do something, they'd generally better do it.  On the ground, overbooking the flight and telling some passengers they have to get off the airplane or they'll be bodily subdued and taken off that airplane is seriously wrong.

In the end, this will be forgotten within a day or so. Back to the SFGATE article:


United Airlines spokesman Jonathan Guerin said, “We’re reaching out to this passenger to talk directly to him. We know that this is upsetting to all of our customers.”

Chris McGinnis, a travel writer who writes the TravelSkills.com blog, called the matter a “PR nightmare. It’s shocking and appalling and abhorrent to anyone seeing the video.”

At the same time, he said, “Everyone will be all up in arms and say they’re going to boycott United — but travelers have very short memories. So the next time United has a flight for $139, and everyone else is selling it for $189, they’ll forget about the boycott.”

Typical short attention span?  Outrage of the day?   Remember: United was at the center of a PR storm just two weeks ago for barring the children of employees from boarding an airplane on those free tickets while wearing leggings.  Did you remember it was United?  I didn't.

How do we get real reform here?  How do we get the airlines to stop overbooking and stop bodily throwing people of planes?  According to the U.S. Department of Transportation, United Airlines bumped 3,765 passengers in 2016, or less than half a percent — involuntarily.  The report says 40,629 passengers on 12 airlines were involuntarily bumped.  In my mind, if they think they're losing money at it, they'll stop.  After all, remember that often-repeated story about a company removing one olive out of every salad they served (back in 1987, in first class alone) and doing it to save $50,000 a year?  That was an airline: American Airlines.  If they lose enough seats every year, and have a way to track the sales they didn't make because of this, they'll change.