About That Small Engine I'm Building

Small?  Tiny?  How does 3/4 cubic inch strike you?  To me, that's closer to tiny than small, but definitely in the range.  3/4 cubic inch is bigger than the tiny model plane engines and smaller than any lawnmower I've owned.

The short update is that it still doesn't run. A longer update is I haven't tried to run it since finding the fuel bottle destroyed back a bit over two weeks ago.  The parts I need to fix the tank were here by the day after Christmas, much sooner than I expected, but I haven't tried to put gas in the tank and start it yet.

I've been doing other things.  I noted in that linked post that it was time to take that valve stack apart. For openers, it didn't look like the intake valve spring was moving right, so I did something I should have done all along and tapered the valve guide per print.  First the intake and then the exhaust.  Because I didn't think it possible to remove the valve guide from the intake block without ruining the guide, I set up my four jaw chuck on my manual Sherline lathe and used their compound to cut the taper. 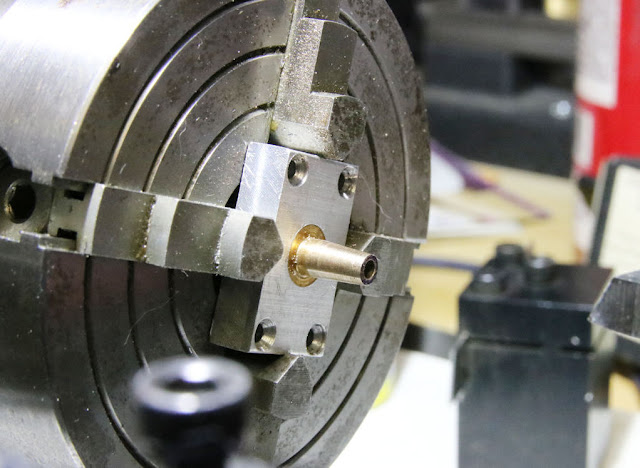 When I ran the flywheel with my starter drill, I didn't see any motion of the intake valve.  I want to see it opening and closing, but I've been told by a couple of guys who have made this engine that it might not be perceptible.  On the other hand, I've seen videos where the intake valve's movement is very obvious.  There's a potential problem with the intake valve spring in that I made it from music wire I had on hand (.015" dia) not what the plans called for (.013" dia). If there are two identical springs made with those wire sizes, the one made with bigger wires is stiffer than the one made with the smaller.  Springs are complicated. The strength comes from the wire diameter, the pitch (turns per inch) and the diameter of the spring. I could have used the wrong wire but made up for it by making too many turns.

Strangely, I have around three feet of .013" wire in the house. It's called the second string in a set of Ernie Ball Slinky guitar strings.  Even stranger, it's cheaper to sacrifice a set of those strings than buy a few more feet of .013" music wire from the usual sources.

I'm just about at an impasse where I don't know what to do.  One possibility is to rewind the intake valve spring.  I have considered sending the whole engine to Hydraulic Press channel on YouTube to let him crush it into a round slab of mixed metals.  A better idea is to back away for a few days.  I could use to clean up and organize a bit better in the shop anyway.