Turns Out the FDA is Blocking Another Covid-19 Vaccine

Remember this post from the end of December, about how the first Covid-19 vaccine was available in January of 2020, but the FDA wouldn't approve it?  They wouldn't allow volunteers who would take the vaccine be exposed to the virus because it wasn't protocol.


The FDA prohibited rapid "challenge trials"—where volunteers take the vaccine and then expose themselves to the virus in a lab, rather than waiting agonizing months to see how many catch the virus "in the wild." The challenge trials could have proved the effectiveness of the vaccine in weeks or a month or two. The FDA considered the risk to the volunteers to be too high.

The December article was based on one from the Foundation for Economic Education, and FEE does it again this weekend with "The FDA Is Holding Up a Cheap Vaccine as COVID Deaths Surge" by John Miltimore, Managing Editor.  This one concerns the Oxford-AstraZeneca vaccine, developed as its name implies, by Oxford researchers and produced by AstraZeneca.  In summary, it's based on a better known technology than both Pfizer and Moderna's vaccines (modification of an adenovirus - a cold virus), it's easier by far to handle than Pfizer's, still easier than Moderna's and it's the cheapest of the three vaccines by far.

From American Council on Science and Health, November 2020.

The ability to handle the vaccine by keeping it between 36 and 46 F which most standard refrigerators will do, as opposed to -94F (Pfizer) which takes extraordinary measures and -4F (Moderna) which most standard freezers can do, will save money in getting the vaccines distributed.  Add that to $4/dose instead of $19.50 (Pfizer) and $37 (Moderna) and the economics are a slam dunk win for AstraZeneca.

The strongest argument for the AstraZeneca vaccine, though, may be the bottom line in that comparison.  AstraZeneca can produce and ship almost three times the amount of vaccines that Pfizer and Moderna can ship - combined.  Between the three, should we keep a commitment to using all three, that's likely enough to vaccinate everyone in the US that would accept vaccination.  (Note that all three require two doses)

Oh, the AstraZeneca vaccine has been approved by and is being administered in the UK.  It is being produced in Baltimore.  Really.  Baltimore.

It's worth pointing out the story behind the strange effectiveness rating of the AstraZeneca vaccine, of "62% to 90%" in the third row of that chart.  In the initial test, someone accidentally miscalculated the dosage and the experimental group got half the required dose on the first shot.  The mistake was found and the dosage doubled to normal for the second shot.  That group had 90% effectiveness.  When they did the second group with the "proper" dosage for both shots, the effectiveness was 62%.


Peter Openshaw, professor of experimental medicine at Imperial College London, said the finding that a smaller initial dose is more effective than a larger one is good news because it may reduce costs and mean more people can be vaccinated.

“The report that an initial half-dose is better than a full dose seems counterintuitive for those of us thinking of vaccines as normal drugs: With drugs, we expect that higher doses have bigger effects, and more side effects,” he said. “But the immune system does not work like that.”

So what's up with the FDA?  Last time I remarked that it was a CYA move.  Someone said why should they care when nobody is ever held responsible for mistakes in Washington.  It's a bit more than that.  The FDA, like all agencies, is not there to protect the population, it's there to establish and follow procedures, as this two year old twitter exchange between Thomas Sowell and Christopher Manion talks about.  Both of them are very right. 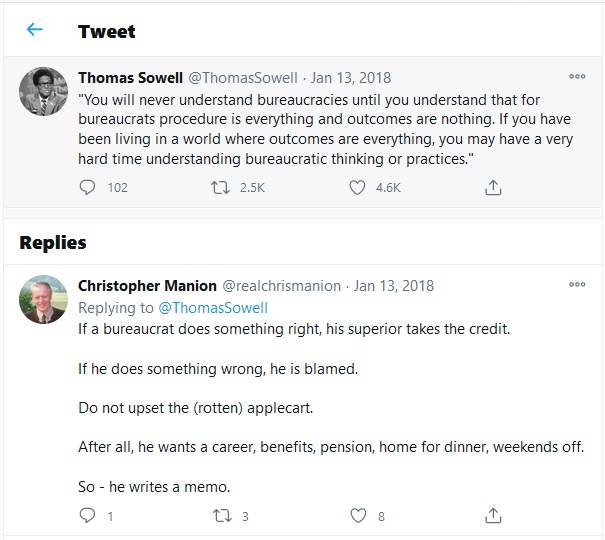 In the Aerospace world where I worked all my career, the situation at my level was more results oriented than a bureaucrat, but it was common knowledge to talk about the guy who would sit in front of the Senate or House, on the evening news, saying he had no knowledge of the bad things going on.

In a situation like this, think of the two errors that the FDA could possibly make.  Think of some dude at a desk where he wants to work without making waves for 40 years and retire with a fat pension.  Most especially, he really, really doesn't want to be the guy telling the senators running the inquiry that he did anything other than the black letter procedures he's supposed to follow.  He can make two mistakes.  He could approve a bad drug and cause lots of harm to people, or he could fail to approve a very good drug and still cause lots of harm to people.  In the first case, he's more likely to be sitting in that seat in front of the inquisition committee explaining why approving the bad drug was following procedures properly.  In the second case, when he fails to approve a good drug, people die but the bodies are buried in an invisible graveyard.

Bureaucrats get in trouble for doing the wrong thing, not failing to do the right thing.