I just don't have any decent pictures to show what I'm doing.  Let me back up a minute.

We started down the road of my building a dream shop for retirement in 2013 and broke ground on it in early 2014. As always, no one can predict the future with absolute accuracy so we had no idea that an early retirement offer would change my plans and have me retire after the addition was put on the house but long before the shop was done.  In '14, we had the addition put on the house, with the construction being finished in May and by the end of the year adding the big machines.  Long time readers might remember stories I posted as I converted my milling machine to CNC.

We've been adding household stuff into the room as well as adding tools and accessories all over the shop, but living with the original layout of the shop since the completion of the CNC conversion in 2016.

As I'm wrapping up the project that has sucked so much time in the last 18 months (!?!), my little IC engine, I've noticed some things I did wrong in the shop layout that have started to annoy me.  I finally decided I wanted to change the layout in the shop, increase storage around the metal shop area, and eventually decided that it needed to be pretty seriously changed.  I had silly little issues like having to walk from the mill halfway through the shop to get a drill bit or a screw.  While I think that stuff about walking 10,000 steps a day is a meaningless number not based on anything, I especially don't want to do it in a couple of hours in the shop.

The vision when I started was there were to be three shop areas.  One would be machine tools - lathes and mills (there are three and two respectively).  The second area would be for woodworking with a pair of woodworking benches, table saw, router table and hand tools.  The third area would be for reloading, cleaning and working on guns, plus working on fishing tackle, making lures and the very occasional fishing rod.  By necessity, it has morphed into the area where I do much of my battery testing.  (The necessity is that I have nowhere else to set up a computer and monitor.)

In intervening years, the limited woodworking I've done is to build a few sets of shelves that went into the reloading area, and the enclosure for the big milling machine.  There have been a couple of other things, but nothing major. 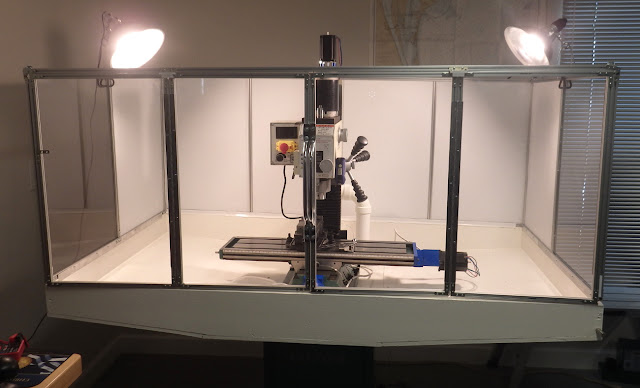 The mill in its enclosure when I declared the CNC conversion done and started trying to make things with it.  In the bottom left corner of the picture you see a wooden bench top with a mouse pad on it.

In the next day or so, the mill enclosure and that work bench, which is paired in an "L" with another bench just like it, will swap places.