Getting an Idea Into CNC

It has been a day of staying busy with lots of little and not so little tasks.  Some of the Windows 10 discussion has been very good.  I thought I'd put up a little more details about some of the things I was talking about.  A lot of newcomers to CNC are confused at the many pieces of software that's required.

Today, I took a line drawing, a DXF format drawing of a part and made a 3D model of it in Rhino3D.  This is the Z-axis motor mount for my G0704 CNC conversion.  Note that this drawing is copyright Daniel E. "Hoss" Kemp. 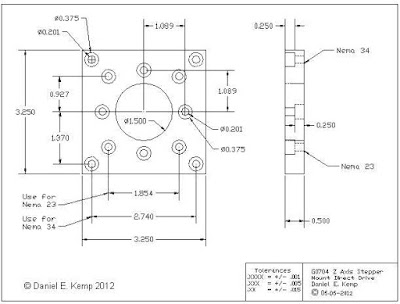 Given those dimensions, and the fact I'm using NEMA 23 stepper motors (that's a National Electronics Manufacturer's Association specification for the mounting hole pattern on the motor), that means I omitted the holes marked "Use for Nema 34" on the drawing.  I turned that into a 3D drawing in Rhino 3D... 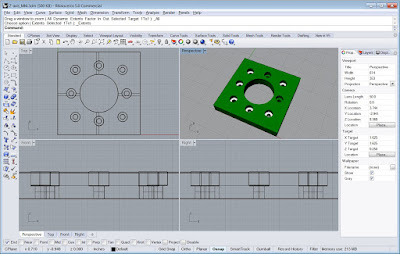 The next process is to save this as an .STL file, the format 3D printers usually use - it comes from the earliest 3D printers: stereolithography.  The .STL file becomes the input to DeskProto.  DeskProto is a CAM program (Computer Aided Manufacturing).  It takes the 3D model, positions it on a virtual milling machine, and creates tool paths for the cutting tools to take.  The tool paths are written in what's frequently called G-Code.  (I've often thought that's because many of the commands start with the letter G and two numbers).  It's an industry standard language, RS-274.

The CAM program gives a graphical output that shows the path of the center of the cutting tool, as well as the G-Code file.  In this case I'm using a 3/8" diameter end mill.  It's too big for the holes, I'll drill those with direct commands to the CNC mill. 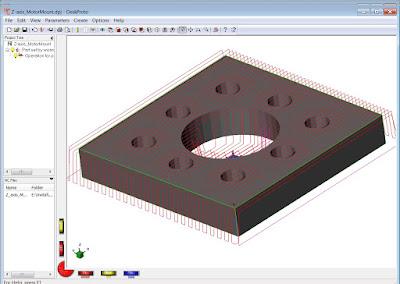 Finally, this G-Code file, also called a CNC file, it loaded into a motion control system that drives the motors on the CNC mill.  I've been using a program called Mach3 for that.  It's running on an air gapped XP machine.  I've had the Mach3 installation (and almost nothing else) on that particular computer for years, and saw no reason to toss the PC when XP went unsupported.

Now that I've gone through all of that, I don't think I'm going to use it.  I think it will be easier and better to drill the holes with direct commands (that is, go the exact location of the hole and do the series of operations they'll require) and then cut out the large hole in the middle with something like the tool paths shown here.   The whole purpose of all of these steps is to create the G-code.  That can be created with a plain text editor; you just need to know the X, Y, Z coordinates of the places you will be working.  I've created a file with a spreadsheet and copied the coordinates into a text file.