Good capitalist figures are hard to find stories about because they tend to be quiet folks who just do what they do.  They're generally not attention whores, they're more often the quiet ones that don't get noticed.

Meet Manaj Bhargava.  Chances are, you've never heard of him, but you've heard of his invention that made him rich, those ubiquitous red and yellow bottles of 5 Hour Energy.  Bhargava says he was surprised at the rapid acceptance of his invention, but from that first story link, a February 2012 issue of Forbes:


In one corner of Manoj Bhargava’s office is a cemetery of sorts. It’s a Formica bookcase, its shelves lined with hundreds of garishly colored screw-top plastic bottles not much taller than shot glasses. Front and center is a Cadillac-red bottle of 5-Hour Energy, the two-ounce caffeine and vitamin elixir that purports to keep you alert without crashing. In eight years 5-Hour has gone from nowhere to $1 billion in retail sales. Truckers swear by it. So do the traders in Oliver Stone’s 2010 sequel to Wall Street. So do hungover ­students. It’s $3 a bottle, and it has made Bhargava a fortune.

It has brought him to Forbes list of the richest people, with a net worth estimated at $4B.  The 62 year old now is in the enviable position to be able to live on 10% of his income and donate the other 90% to his personal charity, Stage 2 Innovations lab in Farmington, Michigan.  It's here where he's likely to do the most good.


The Stage 2 team consists of more than 100 engineers of all different backgrounds. The main focus of the project is to adopt ideas and concepts that have been around for centuries, but have not advanced due to perceived impracticality or inefficiency. Bhargava offers the team funding, plus as much 5 Hour Energy as they need in order to bring these ideas into fruition, designing efficient machines that can be manufactured on a large scale.

If you were to try to address the two largest needs in the third world, you'd probably end up pretty quickly focusing on energy and clean water with energy first because if you have energy you can purify water.


Free Electric exercise bike/generator: With a single hour of operation, this stationary exercise bike is claimed to generate enough electricity to power small household appliances, including lamps, toaster ovens, and cell phones. Pedaling turns a turbine that generates electricity and stores it in a battery for use throughout the day. This device allows for a clean energy source that can easily be used in homes. Bhargava plans to distribute 10,000 of these bikes in India next year, claiming that the bike could be made for less than $100. He expects that a community may share a bike to power numerous batteries for several households. 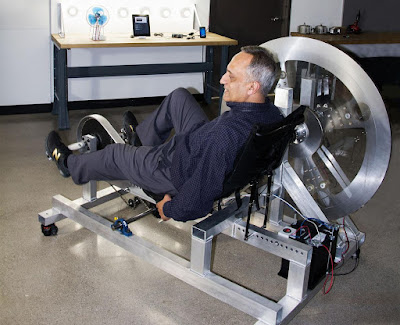 Mandatory nerd stuff.  Note that they talk about pedaling the bike for an hour and using the electricity throughout the day.  It doesn't say that it will last all day; that depends on how much energy is stored vs how much is removed.  Some numbers might help.  A professional road cyclist can put out amazing amounts of power - for a little while.  I've read that British sprinter Mark Cavendish puts out almost 1600 watts, but only for a few seconds.  For sustained power output, good riders can put out "a few hundred", like 300-400 watts, maybe 500.  But after an hour, that's still only 300-400 watt-hours.  It's highly unlikely an untrained villager will put out more than the low end of those numbers.  In (what looks like) a 12V battery, 240 Watts is 20 amps, though.  (I have a 35 amp hour battery I could fill in under two hours with one of these - assuming I could still put out 240 watts continuously for two hours.)   Finally, there's no free energy here.  That 240 watts the villager is providing will have to be supplied to the villager as food.

My point here, though, is that this is the story of a good man who made it big through innovation and creating a product (actually, he pretty much created the "energy shot" market).  Now his goal is to help others.  Voluntarily.  No government or NGO is taking 90% of his wealth; he's giving it.  There others out there that we never hear about.