A Little Followup on the Long Range Strike Bomber

Friday, Bayou Renaissance Man ran a piece on the contract conflict over the Long Range Strike Bomber (LRS-B).   Briefly, the contract was awarded to Northrup Grumman, and Boeing/Lockheed Martin who lost are suing over improper handling of some aspects.   Quoting:


Not surprisingly, the Long-Range Strike Bomber protest is on. Boeing and Lockheed Martin claim the Air Force’s selection of Northrop Grumman for the development and early production work – worth $23.5 billion – was bungled. The service failed to conduct a proper assessment of the risk for both teams to execute the work and neglected to account for modern advances in manufacturing and life-cycle maintenance, all of which would reduce the cost of such a program, according to Loren Thompson, a Washington DC-based analyst. Thompson’s think-tank receives funding from both Boeing and Lockheed Martin, and the latter employs him as a consultant; he publicly endorsed the Boeing/Lockheed Martin bid despite the requirements and source-selection criteria being classified. Thompson receives no funding from Northrop Grumman.

The losers filed their protest with the Government Accountability Office Nov. 6 after receiving their debrief Oct. 30 from the Air Force.

And, not surprisingly, the other protest is on. You see, in Washington, there’s the protest – filed with GAO and subject to a 100-day audit – and there’s the Protest – the political campaign to disparage the agency that made the alleged flawed choice and its entire strategy. The latter is designed as an end run to whatever the GAO may rule. By undercutting the agency and its strategy at the knees in Congress, pressure can force an agency into submission regardless of a GAO ruling.

The company I work for is not involved in this contract (well, I suspect - but don't know - we'll subcontract to the ultimate winner for some of the avionics), so I don't have a dog in this fight, but I have friends that have left to go work on this contract.

Contesting the award seems to be the norm in these mega-contracts.  Do you remember the Boeing/Airbus tanker scandal a few years ago?  The contract for the next generation Air Force tanker was awarded to a joint venture between Airbus and Northrup Grumman; Airbus had built a plant in Mobile, Alabama to build the A-330 based tanker, but after a messy set of investigations, the contract was taken from Airbus and given to Boeing.  The Airbus tanker was to be built mostly in France, with final assembly in Mobile, probably as a political move to appease lawmakers' concerns of giving jobs to France.  Today, Airbus is building the biggest selling aircraft in their fleet, the A320 models, in that Mobile facility.   Boeing is building the KC-46A Tanker in its Seattle-area facilities.

That was a $35B contract.  The first LRS-B contract is for $23.5B and while the Air Force inflated both contractors bids to try factor in how these contracts always go over cost, it seems a safe bet it will go beyond that.  Do you think that whichever side won the contract the other guys are not going to go sue and do everything they can to get that contract?  A contract this size, while probably not life or death for the companies involved, is going to be devastating loss for the loser and great benefit for the winner.  Lots of good details in the story at Aviation Week.

This is the way things are done these days.  When the government gets so gargantuan that they call the shots on everything, industry works by lawsuits and counter suits. 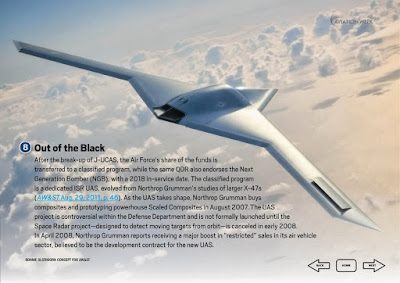 There are no official concept sketches of what this bomber is going to look like, but this is a concept illustration from industry insiders at Aviation Week and Space Technology magazine (often referred to in the biz as "Aviation Leak".  Published here.