Ars Technica reports on a new smartphone privacy threat that bares thinking about: it uses inaudible, ultrasonic sounds to surreptitiously track a person's online behavior across a range of devices, including phones, TVs, tablets, and computers.  These sounds, above the range of human hearing, are embedded into TV commercials or are played when a user encounters an ad displayed in a computer browser.  While you can't hear the sound, nearby tablets and smartphones can detect it.  When they do, browser cookies can now pair a single user to multiple devices and keep track of what TV commercials the person sees, how long the person watches the ads, and whether the person acts on the ads by doing a Web search or buying a product.  Of course, they also know the location of all those appliances, too.  The Center for Democracy and Technology (CDT) raised the privacy concerns with the Federal Trade Commission (pdf warning) for a meeting yesterday (Monday, the 16th).


Often, people use as many as five connected devices throughout a given day—a phone, computer, tablet, wearable health device, and an RFID-enabled access fob. Until now, there hasn't been an easy way to track activity on one and tie it to another.

"As a person goes about her business, her activity on each device generates different data streams about her preferences and behavior that are siloed in these devices and services that mediate them," CDT officials wrote. "Cross-device tracking allows marketers to combine these streams by linking them to the same individual, enhancing the granularity of what they know about that person."

It turns out this not only isn't forbidden or illegal in any way, although it seems awfully virus-like to me, one of the companies that writes and sells the software that manages this, SilverPush, reported news that it received $1.25 million in venture capital.  Apparently tracking "everything you think, do, or say" is a growth industry.  The Indian news source in that link says:


At present, SilverPush is growing at a rate of 50 per cent quarter on quarter. In the last fiscal year, the startup had earned a revenue of USD 1.25 million. And for 2015-16, it is expected to touch USD five million.

The CDT reports "As of April of 2015, SilverPush’s software is used by 67 apps and the company monitors 18 million smartphones."  SilverPush is aware that some of us will find their approach ... unappealing.


I pointed out that this could be pretty creepy, since it sounds like there’s an app listening in the background on your phone or tablet. Chawla acknowledged that there’s a risk of negative public perception, but he said that SilverPush isn’t receiving any actual audio data — once a match has been made, the only thing that gets sent back to the company is the identification code linking the devices. Chawla also said he’s working with the Mobile Marketing Association to develop guidelines around using this technology in a way that respects users’ privacy.

I don't know about you, but I don't find the fact that "the only thing that gets sent back to the company is the identification code linking the devices" particularly helps.  I don't like the idea of being watched, listened to or tracked at all, and I don't particularly like the idea of ads being shoved in my face all the time.  It reminds me of that scene in Minority Report where Tom Cruise's character is walking into a store and the ads are calling him by name - everything targeted at him.  That move is increasingly prophetic.  I don't see any mention of how to avoid it or turn it off, except possibly by putting something over the microphone so that phone can't hear the TV (or vice versa). 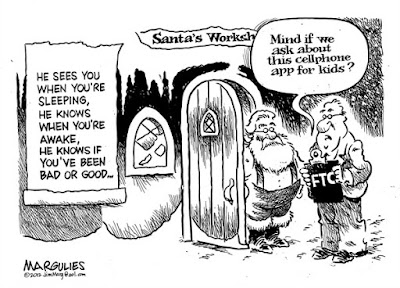