The news came out on Monday in the orient that China had been granted a coveted "reserve status" by the International Monetary Fund.  This is putting the yuan on par with the dollar and Euro as part of the Special Drawing Rights (SDR) currency the IMF controls.


The decision to add the yuan, also known as the renminbi, to the Special Drawing Rights (SDR) basket alongside the dollar, euro, pound sterling and yen, is an important milestone in China's integration into global finances and a nod to the progress it has made with reforms.
...
The yuan CNH= CNY= will have a 10.92 percent share, in line with expectations, after a review of the weightings formula for the SDR which also cut the euro's share by more than 6 percentage points.

To be included in the SDR basket, the yuan had to meet the criteria to be "freely usable," or widely used to make international payments and widely traded in foreign exchange markets -- a yardstick it missed at the last review in 2010.

The yuan's inclusion in the basket from October 2016 is a largely symbolic move with few immediate implications for financial markets. But it is the first time an additional currency has been added to the SDR basket, which determines which currencies countries can receive as part of IMF loans.

Since the makeup of the basket of currencies can only add up to 100%, the yuan's inclusion is at the expense of other currencies.  The euro's share will be cut from 37.4 percent to 30.93 percent, the British sterling and Japanese yen, will drop to 8.09 percent and 8.33 percent respectively, while the dollar remains broadly unchanged at 41.73 percent.  In this sense, the IMF is giving a nod to the importance of the yuan in the world economy, symbolically pushing the other currencies into diminished roles.

This is all part of a scenario that Jim Rickards was talking about (and I quoted) last May.  The financial world is realigning and the era of the dollar as the world's reserve currency is ending.  This doesn't mean that trouble is coming tomorrow or next year (which is just a few weeks away), but it does tilt the slippery slope in that direction.


He'll be among the first to tell you that financial collapse could happen this week or in a decade.  It's impossible to tell.  In many ways, it's like an avalanche: it's impossible to blame the avalanche on any particular snowflake, but any one of the continuing snowflakes could cause it.  What's it look like?  The only "bank" with any solvency left is the International Monetary Fund.  The IMF has Special Drawing Rights, SDRs, that would allow it to prop up the world when the collapse happens.  His most likely scenario would be that all banks around the world, all banks, would be shuttered.  After some time, perhaps a few days, perhaps a week, everyone would be able to withdraw 250 or $300 a day for food and energy expenses.

This is the nightmare situation; the kind of situation where, like Greece, the states in the IMF could impose a "Greek haircut"; that is, they could confiscate some portion - half? - of every bank deposit in the world.  The world today seems to be a notch closer to Rickards' scenario.

To me, a key in the IMF statement/analysis is that phrase, "the dollar remains broadly unchanged at 41.73 percent".  That's acknowledging that, for now, the dollar is still the dominant currency in the world.  If that should start to drop, it's a warning sign.  If the dollar should go into a collapse, you would see explosive price inflation as dollars are sold off at a loss to avoid further loss.  I've seen estimates that there are three times as many dollars held overseas as in circulation in the US.  If they flooded back, instantly quadrupling the total number of dollars available, I could see the price on everything jumping that amount or more.  This would truly be the SHTF. 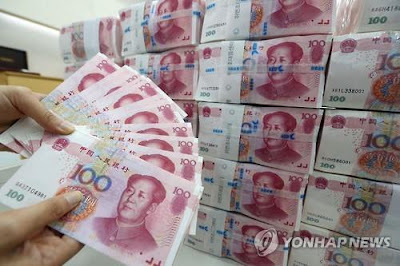