Techy Tuesday - "Seeing Through the Walls" Using WiFi as Radar


Since 2013, CSAIL researchers have been developing technologies that use wireless signals to track human motion. The team has shown that it can detect gestures and body movements as subtle as the rise and fall of a person’s chest from the other side of a house, allowing a mother to monitor a baby’s breathing or a firefighter to determine if there are survivors inside a burning building.

Next up? Seeing a person’s silhouette and even distinguishing between individuals.

In a paper accepted to the SIGGRAPH Asia conference taking place next month, the team presents a new technology called RF Capture that picks up wireless reflections off the human body to see the silhouette of a human standing behind a wall.

In other words, from the opposite side of a building, RF Capture can determine where you are, who you are, and even which hand you are moving.  (RF Capture paper - pdf warning)  Who you are?  They claim the ability to identify the right person out of 15 with a 90% success rate.

While the surveillance state and privacy aspects of this are obvious, MIT's press release chooses to barely mention them; for instance, preferring to mention a firefighter being able to determine if there are survivors in a burning building and more family-friendly things like that child monitoring example.


“We’re working to turn this technology into an in-home device that can call 911 if it detects that a family member has fallen unconscious,” says Katabi, director of the Wireless@MIT center. “You could also imagine it being used to operate your lights and TVs, or to adjust your heating by monitoring where you are in the house.”

Like most radar, the software is the heart of it.  The system operates by sending out these "5 to 8 GHz" radio waves and getting reflections from the subjects.  It does a lot of processing of those reflections, and they're up-front about the weaknesses of the system in their conclusions:


1. It assumes that the subject starts by walking towards the device, hence allowing RF-Capture to obtain consecutive RF snapshots that expose his body parts. Future systems should expand this model to a more general class of human motion and activities. [emphasis added - SiG] 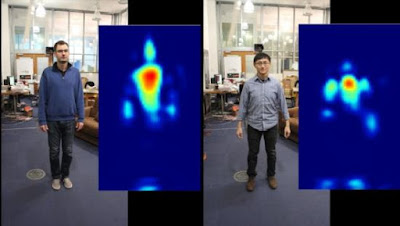 Interesting idea.  Wall-penetrating imaging using WiFi (probably because so much equipment is available to experiment with) are not new, and while this is crude, there's clearly promise here.  This particular device is really just a lab curiosity, and I don't think it's very useful at this level.  Still, it's worth being aware of and thinking about.