Couldn't finish what I wanted to do, except for one little task, upgrading to Tails 1.6.  I rarely use Tails, but it's there on a thumb drive hanging where I can grab it if I need to bug out and can't take computers, along with a bigger thumb drive full of things I'd like to have.  And if you've never heard of TAILS - The Amnesiac Incognito Live System - or TOR - The Onion Router, go here.

My main project for the day was to get my Raspberry Pi running.  Unfortunately, it only has HDMI video output and I don't have a monitor available with an HDMI port.  Everything is standard VGA.  The topic of doing that conversion is really an FAQ, I just didn't check the monitors I have available.  I was looking forward to getting that little thing booted up and seeing what it's like.  Now it's looking like next weekend at the soonest.

I did get a lot of busy work done that was overdue, so it wasn't a complete waste of a day.

And speaking of spinning wheels, the Independent (UK) is reporting that there is a steady flow of the Syrian refugees flowing into northern Norway on bicycles.  (Note the article is from August 31, when I imagine conditions were more hospitable in the arctic regions of Norway).  They explain that the Storskog border post between Norway and Russia is not open to pedestrians, and passports are checked for people on foot or in cars but not on bicycles.


The Storskog border station -- just two hours drive from the Arctic City of Murmansk in Russia's far north -- is Norway's only legal border crossing with Russia.

According to border agreements, it is illegal either to cross the border on foot or to give someone without papers a lift, a problem Syrian refugees have sidestepped by using bicycles.

Could it be a silly legal loophole?  They'll check your passport if you're in a car, but won't even try to stop a bicycle?   What's next?  Anyone on a skateboard can come into the country?  Anyone on a hang glider? Who would think that they don't check the documents of someone coming across the border, just because they're on a bicycle?  Note that it doesn't say they're using the bikes to cross elsewhere, like using an off road bike to cross away from the official border crossing.

Shifting back to the Independent:


Refugees are reportedly using bicycles to cross the Arctic border into Norway to exploit a legal loophole in the country's immigration controls.
...
Police Chief Inspector Goeran Stenseth said 151 people had crossed this year near the northeastern Norwegian town of Kirkenes, 2,500 kilometres (1,550 miles) northeast of Oslo, most of them during July and August. 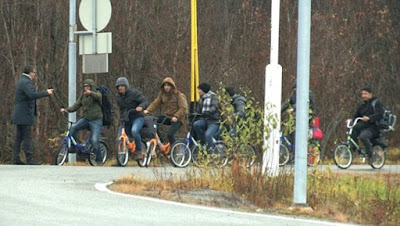 The Daily Mail posts this picture of what it says are refugees on bikes that are obviously much too small for them, and report that many don't seem to know how to balance themselves.  Stolen kids' bikes?  Someone making some money rounding up (stealing) kids' bikes and selling them to the refugees?

Sometimes I just have no words...

Labels: big freakin' out of control government, eemigration, Me, techy