True to their nature as central bankers, they stressed worry about deflation, and presented comical inflation numbers to make their point.


“I worry about deflation globally,” new IMF Economic Counselor Maurice Obstfeld said in an interview ahead of an annual IMF research conference that focuses this year on unconventional monetary policies and exchange rate regimes. “It may be time to start thinking outside the box.”

Weak—and in some cases falling—price growth has plagued Japan, Europe, the U.S. and other major economies since the financial crisis. Plummeting commodity prices are exacerbating the so-called “lowflation” and deflation problems that curb investment, spending and growth.

According to their data, shown here, the advanced economies in the world are showing mere 0.3% inflation, a level not seen since the depths of the '08/'09 crisis, while their goal for the world is 2%; doubling prices on everything every 36 years. 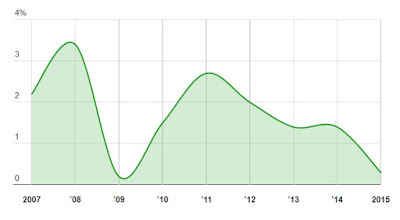 The IMF is talking about "thinking outside the box" and then goes on to suggest... wait for it ... permanent Quantitative Easing!  Because what they've done so far has worked out so well.


So, what would be thinking outside the box for Mr. Obstfeld? One option is a proposal by Adair Turner, a member of the Bank of England’s Financial Policy Committee, for central bankers to overtly finance increased budget stimulus with permanent increases in the money supply. By contrast, the increased money supply resulting from recent central bank bond-buying programs is meant to be temporary.

The problem is that all that money they created through QE went to banks who propped up housing prices for their own reasons, and corporations who found it was so cheap and easy to borrow money they could go on a spending spree, buying other companies, and doing minimal investment in more lasting things, like modernization and improvements.  As the Guardian puts it:


Massive monetary policy stimulus has rekindled growth in developed economies since the deep recession that followed the collapse of Lehman Brothers in 2008; but what the IMF calls the “handover” to a more sustainable recovery – without the extra prop of ultra-low borrowing costs – has so far failed to materialise.

Meanwhile, the cheap money created to rescue the developed economies has flooded out into emerging markets, inflating asset bubbles, and encouraging companies and governments to take advantage of unusually low borrowing costs and load up on debt.

The distortions created by the central banks has been a central problem.  The other problem is that we never really fixed the problems of '08.  The problem in '08 was too much borrowing and too much leverage throughout society .  Too many institutions are over-extended on free credit.


Meanwhile, the failure to patch up the international financial system after the last crash, by ensuring that banks in emerging markets hold enough capital, and constraining risky borrowing, for example, means that a new Lehman Brothers-type shock could spark another global panic.

“Shocks may originate in advanced or emerging markets and, combined with unaddressed system vulnerabilities, could lead to a global asset market disruption and a sudden drying up of market liquidity in many asset classes,” the IMF says, warning that some markets appear to be “brittle”.

Bayou Renaissance Man points to an issue of Porter Stansberry's newsletter saying we are already in the opening phases of this “financial instability”.


We are in the early stages of a great debt default – the largest in U.S. history.

We know roughly the size and scope of the coming default wave because we know the history of the U.S. corporate debt market. As the sizes of corporate bond deals have grown over time, each wave of defaults has led to bigger and bigger defaults.
...
Default rates on "speculative" bonds are normally less than 5%. That means, less than 5% of noninvestment-grade, U.S. corporate debt defaults in a year. But when the rate breaks above that threshold, it goes through a three- to four-year period of rising, peaking, and then normalizing defaults. This is the normal credit cycle. It's part of a healthy capitalistic economy, where entrepreneurs have access to capital and frequently go bankrupt.
...
Six years after default rates normalized in 2003, they suddenly spiked up to almost 10% in 2009. But thanks to a massive and unprecedented government intervention, featuring trillions of dollars in credit protection, default rates immediately returned to normal in 2010. As a result, only about $1 trillion of corporate debt went into default during this cycle.
...
What happens next should be obvious to everyone: The big debt-clearing cycle that was "paused" in 2009 will make the next debt-clearing cycle much, much larger – by far the biggest we've ever seen. When will that happen? Six years after default rates last returned to normal. In other words... right now.

As Peter says in the BRM post just linked, it's worthwhile reading to go read Stansberry research, and it's worth the time to read the original BRM post.  The IMF has posted the entire report excerpted at that top in a variety of languages and formats.  Final quote back to the Guardian story on the IMF:


Yet the failure of the world’s policymakers to get to grips with the shortcomings of the international financial system over the past seven years, despite the long shadow cast by Lehman and its aftermath, suggests that any measures enacted now are likely to be too little, too late. The message many may take home from Lima is, “batten down the hatches”.