The Keeping Americans From Working Act

Otherwise known as FATCA - the Foreign Account Tax Compliance Act.  FATCA was passed in 2010 when the Evil party controlled all branches of government.  The idea was to punish those ebil peoples who go overseas to work, and "hide their income" from the IRS - a problem that might impact as much as an estimated .00001% of the budget, so it MUST be addressed.

FATCA has had the (probably) unintended consequence of making it financially much harder to be an American overseas, leading to a dramatic increase in the number of American expatriates renouncing their American citizenship.   The Wall Street Journal (paywall) reports that during the W administration an average of 480 Americans gave up their citizenship yearly, while that number has jumped radically since FATCA was passed.  In the just-completed third quarter, a record 1,426 people renounced their US citizenship, bringing the year's total to 3,221, just 196 short of the record for a full year.  It seems a lock to bet that more than 196 people will apply in the fourth quarter, producing a new record number.

As a further kick in the teeth, the feds dramatically increased the fee that these people must pay to renounce.

Simply applying to renounce citizenship now costs $2,350, way up from the $450 fee of a few years ago, meaning the IRS made over $7.5 million just by processing renounced citizenships. The figure is actually even higher than that, as wealthier Americans who renounce their citizenship are hit with an expatriation tax that can total into the millions.

Should you be in that group the democrats considered they could tax without repercussions, you're required to pay an exit tax.  To leave America, you generally must prove 5 years of U.S. tax compliance. If you have a net worth greater than $2 million or average annual net income tax for the 5 previous years of $160,000 or more (that’s tax you paid, not income), you pay an exit tax. It's a capital gain tax as if you sold your property when you left.  There's an exemption for the first $680,000.

As the cheesy infomercials like to say, "But wait!  There's more!"   FATCA drastically increased the amount of paperwork and reporting that foreign banks must do if they allow Americans to bank there.  Foreign banks, brokers, insurers, and other financial institutions must provide the IRS detailed asset and transaction records for any accounts held by Americans, including corporate accounts controlled by American employees.  If the foreign bank refuses, the IRS can slap a 30% withholding penalty on any transaction going from a US bank to the foreign company.

As a result, foreign banks are increasingly refusing to work with American expatriates.  Obviously not the "rich fat cats" that the politicos rail against, but average, middle class Americans working overseas:  English teachers, sales reps, lawyers and retirees - who are the overwhelming majority of expatriates.  Especially the retirees, who generally are overseas because they can live cheaper there than here in the US; the foreign banks don't make enough profit off the retirees when the costs of compliance to the IRS rules are included.

It's not much better for expats working as employees or business partners of foreign companies in the FATCA age.   Any financial accounts they can access must now be exposed to government scrutiny; not just from the US, but from any one of over 100 other countries that have signed FATCA-related information-sharing agreements with DC.  Americans up for executive posts in Brazil, Switzerland, Singapore and elsewhere have been asked to renounce their citizenship in order to get the promotion.

FATCA has the effects of limiting opportunities for Americans to work or live overseas, or making them renounce their citizenship if they want to work.  The exit tax has the effect of the Fed.gov saying, "how dare you think you can take what you earned away from our taxing authority".  Doesn't that sound like something the mafia would do? 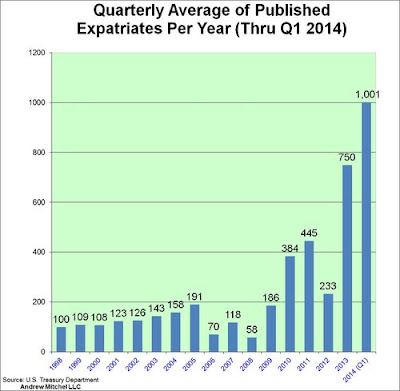