40 Years Ago This Evening

I didn't notice the story at that time; I was in my early life, struggling through my first attempt at college and trying to get established in life.  It wasn't until Gordon Lightfoot's haunting song about it came out in August of '76 that I became aware of the wreck.  Columnist Thomas Walton of the Toledo Blade writes:


A few minutes past 7 p.m. on Nov. 10, 1975, on a bitter and brutal night on Lake Superior, Capt. Ernie McSorley and his shipmates on the Edmund Fitzgerald were in a fight for their lives in a storm more violent than anything they had ever encountered.

The great ship was in peril, and when the end came, it came with such suddenness and ferocity there was no time for an SOS, no time for anything but a few seconds of desperation and terror as the fastest, grandest freighter on the Great Lakes slipped into the depths and into history.

Walton writes with the pain of having lost his uncle on the Fitz, having worked on the ship himself, and then watching how the loss of his uncle affected his father.  Chances are that we all know the basic story because of Lightfoot's song, and he basically got it right if you read around some poetic license, but reading some local writing about the disaster paints a vivid picture.


Forty years later, those of us who lost a loved one that night still don’t know for sure how the Great Lakes’ most legendary tragedy occurred. We know what sank the Titanic. But exactly what caused the Big Fitz to disappear remains a mystery that may never be solved.
...
The Fitz was held in awe everywhere she went. She was a tourist attraction, especially when she sailed through the Soo Locks connecting Lakes Huron and Superior in Michigan’s Upper Peninsula. At 729 feet long, she was the equivalent of a 70-story skyscraper on its side.

Walton writes about his father:


It was only through good fortune and the grace of God that my dad was not on the Fitzgerald the night she sank. He was out in the storm, but on another vessel. He could have taken accrued vacation time to get off the lakes in November when the weather is at its worst, but he didn’t. He was a laker. He needed to be out there.

"He was a laker.  He needed to be out there".  Out on the lakes where a storm of "freezing rain", of a "hurricane west wind" could take out the largest boats mankind knew how to make.  Iron men on iron boats - carrying more iron to build the world.  This is the way I envision Americans.  Not pansies who need "trigger warnings" if someone might say something that upsets them;  not overly pampered kids who need to go into rooms full of puppies to sooth them if they heard an unsettling word. 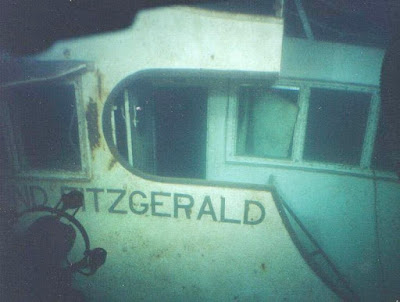 The pilot house of the Fitz, 530 feet down in Lake Superior, from the FWS.

I think anyone who has taken a boat out of sight of land can identify with some of the lyrics in Gordon Lightfoot's song; how it captures the rage of a storm at sea and puts words to being in a situation you just may never survive.  I find it hard to listen to the song.


Every man knew as the captain did, too, was the witch of November come stealin'
...
Does anyone know where the love of God goes, when the waves turn the minutes to hours?