In March of this year, the Atlantic magazine published a fascinating, in-depth article by that name, on the real nature of ISIS and what we can really expect the organization to try to do.  Hat Tip to Self Sufficient Mountain Living who says a British friend mailed it to him.

It's easy for Western minds to dismiss these radical Islamists as insane, trying to establish conditions exactly the way their prophet ordered it in the Koran.  They are far from insane; they're methodically reconstructing the seventh century world as they believe they're commanded to.  They are perfect Muslims in their minds and attack anyone who believes in anything their spiritual leaders say is wrong.  In short, in the words of the subtitle of that piece:


The Islamic State is no mere collection of psychopaths. It is a religious group with carefully considered beliefs, among them that it is a key agent of the coming apocalypse.

I've stated before in various places that Islam is Satanic.  I realize that probably sounds inflammatory, especially to non-evangelicals, but all it means is that it follows tenets that are anti-Christian. Among those beliefs is that phrase "...it is a key agent of the coming apocalypse".  Christians don't believe God requires us to create the apocalypse.  God could end the world in an instant if He desired.  If you compare the biblical book Revelations to Islamic stories of the return of the 12th Imam - the Mahdi - from a well in Iran, I think it can easily be envisioned that they're talking about a similar story but from opposite sides.  Unlike the Christian end-times talk, Muslims who follow this theology believe they need to go on such a killing spree as to wash the world in blood before their leader will return.

I'll be honest: I haven't finished the article, but I think it's worthwhile reading - if not mandatory for understanding the world in 2015.  I'll excerpt some pieces here that particularly made me take notice:
That's probably too much to have excerpted here, but these are important pulls.  There is no negotiation with the Islamic State.  All you have to look at is their imagery: the crucified men and children; the beheaded prisoners, including little girls barely beyond toddler age; prisoners drowned en masse, burned to death, or beheaded in lines along the beaches.  Then we find their own doctrine forbids negotiation or making peace in any way.  No, their doctrine ensures that the only response proper for the Islamic State is the same as for an invasive cancer.   Every single cell must be killed.  The author of that piece offers as one of his conclusions that a slow, continuous bleeding of ISIS might be the best of the bad solutions to dealing with them. 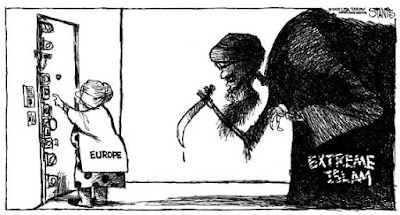