In America, You Can Grow Up to be Anything

Heck, you don't even have to grow up.  From Hope n' Change Cartoons (obviously)

What a country!  We have a white woman self-identifying as black running an NAACP office.  We have an American senator, also a white woman, who self identifies as a native American and got a sweet academic gig out of it.  We have some fraction of 1% of the population who don't identify with the sex they were born into and now, by Federal ruling, get to impose their will onto the other 99.99% of society and use the bathrooms and locker rooms they feel they identify with.

Why stop there?  Gender is so limiting; why not choose another species?  Why not choose to be what you want to be?  I self-identify as a Yak this evening.  Tomorrow, I may choose to be something else.  Maybe even an object instead of an animal.  Do any of these court rulings say I have to identify the same way every day?  (John Kricfalusi style yak from Ren and Stimpy) 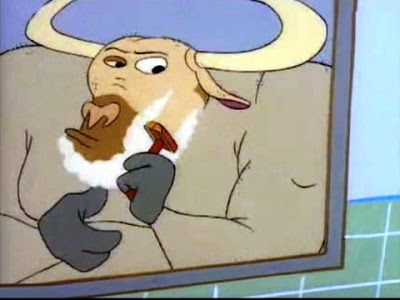 At a high school in the Chicago area, a young man (sorry - no one is saying the kid doesn't have a normal XY chromosome pair so genetics say that's what he is, regardless of what he feels he is) has been pushing on the school district; Township High School District 211, and demanding accommodations from them.  And the district accommodated.  I'm all for accommodation as long as everyone is accommodated, but in this case it appears that only the complainant is being accommodated.  They bent over backwards for the kid, providing a separate bathroom, and then a curtained-off area in the girls' locker room.  The District did everything for the complainant except grant him access to the girls' showers while the girls were in them.  Rather than being appreciative for the school's efforts to accommodate his needs, he continued to press the legal actions to be allowed full access to the girls' areas.  The Examiner puts the parents concerns this way:


But many parents of students who aren't transgender are appalled. Parents of girls are particularly incensed that their daughters will have to share locker rooms and private facilities with transgender boys. They are concerned about girls dressing or being naked around people of the opposite sex. They feel their children's rights to privacy are being violated by being forced to share bathrooms. It's fine when the genitalia doesn't show and the boy looks like a girl, but it's asking a lot to let a kid who still has his boy parts change in front of girls. It's asking a lot to make girls with girl parts change in front of guys just because they say they're really girls.

As always, the trick of rights is that you never increase freedom by taking freedom away from people.  A compromise is needed and the kid at the center of the story apparently refused to compromise.  If you inconvenience one person and don't impose on the freedoms of the majority, you've spread more freedom around than if you give one person their desire and remove a freedom from everyone else.  I don't know the exact numbers, nobody is reporting, but instead of making 99 people comfortable and 1 person less than completely happy, we've made one person happy and 99 people very unhappy.

It's nice to say, "All that really has to happen here is the adults have to put their prejudices in check," as Mara Keisling, executive director of the National Center for Transgender Equality did, but you're dealing with very deep cultural attitudes.  Separate bathroom facilities for the sexes are almost always the case in the US.  Small offices and small buildings may have only one restroom, for only one person at a time, but I've never worked or even been in a building with large bathrooms that were mixed.

Handing the conclusion off to Stilton Jarlsberg of Hope n' Change: