Modern Day Pilgrims, I Tells Ya

So says the POS POTUS: 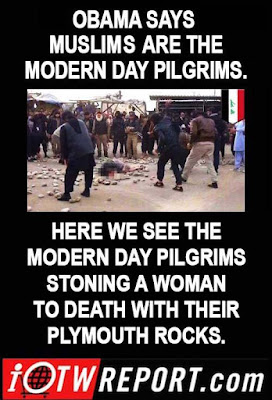 From IOwnTheWorld, via a friend's email.

It's amazingly historically naive, but what can you expect from someone who is so obviously not familiar with American culture?

There are organizations dedicated to helping the persecuted Christian minorities away from Daesh*, and I'd much rather see those people in America than the many refugees we see in Hungary and everywhere else video comes from.  Why?  Tell me how many Christians are in Daesh?   Yeah, zero point zero.   I feel much safer with that population.  Or the Yazidis.

*Daesh is a new term being used for the Islamic State/ISIS/ISIL.  They consider it derogatory - which is a good enough reason to use the name for me.

Posted by SiGraybeard at 2:03 PM