After multiple days of delays due to both weather and then the FAA getting into a snit about whether they should be granted permission to fly, SpaceX got blue skies and a go ahead today.  Unfortunately, SN9, affectionately nicknamed Eileen Dover, did not improve on the results of SN8 or Snate.  In fact, she "leaned over" again when she was supposed to be standing tall.   Seen here a split second before the fireball. 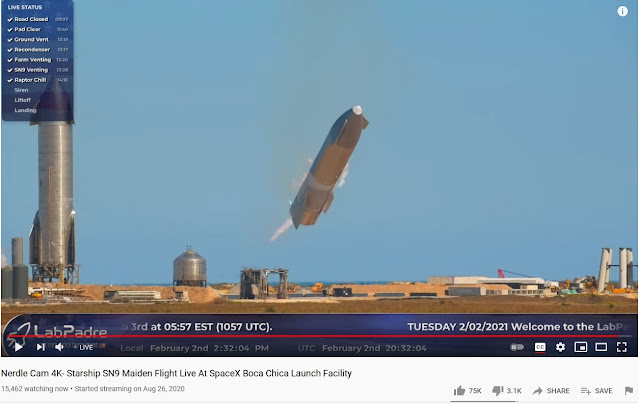 Once again SpaceX streamed the video live from a few minutes before launch through the crash.  The complete video is here and by tomorrow there should be some choice edits of the footage.

Count me among those who thought this would be an improvement over Snate, maybe even completing the landing.  Instead, it appeared that the last seconds of flight, the flip from horizontal to vertical, might have been worse.  It seems that they restarted two engines (as intended) but one shutdown within no more than a half second.  Another negative is the stubby little legs that these Starships have in place of the long legs of Falcon 9 didn't extend like they should for landing.  The positive is that I didn't see any engine burning copper in a green flame like Snate did.

If I recall correctly it took 12 attempts to land a Falcon 9 before they got that technology developed, and I believe Elon has said he expected to go through a similar number for this tricky maneuver.

In case you missed it last Friday, that's SN10 on the left of that screen capture.  SN10 is expected to repeat this test, possibly before the end of the month.

Posted by SiGraybeard at 5:19 PM