When What Was Once Impossible Becomes Routine

It's a very, very common thing in the world.  Some high tech pioneer takes on something that was impossible forever, and then it wasn't anymore.  Then it becomes commonplace until nobody notices it anymore.  This connection you're reading over is an easy example.  So is radio.  Airline travel is another.  You can get on a jet, fly across the country staring out the window and everything below you is socked in clouds.  You spend five hours in the air and not see a thing until you make out the runway through clouds or fog and the airplane settling onto it.  No one thinks for a minute how that was done decades before GPS in our phones.

We had another example late last night Eastern time. SpaceX launched a much delayed Starlink mission to put another 60 satellites in orbit.  For the first time in 24 missions, they failed to recover the booster.  Booster B1059 was on its sixth flight, and the important part of its mission, getting the satellites to the right place for the second stage to do its job, was completely nominal.  The satellites were successfully delivered to the proper orbit.

As a long time observer of these missions, there was a moment that just didn't look right.  There are two engine burns during the landing maneuvers of the Falcon 9.  The first is fairly high up and around 90 seconds before the landing, called the Entry Burn.  Three engines are lit and burn for 20 to 30 seconds.  After the engines shut down there was extra light, looking like either the shutdown didn't work as planned or something worse was going on.  This screen capture is from the mission video, within a few seconds after the shutdown and the booster view is on the left.  There's light shining toward the right, behind the grid fin, that shouldn't be there.  This long after the engines are supposed to be off, that left half of the video should have gone completely dark.  The right side is the second stage engine glowing reddish white hot, as they always do. 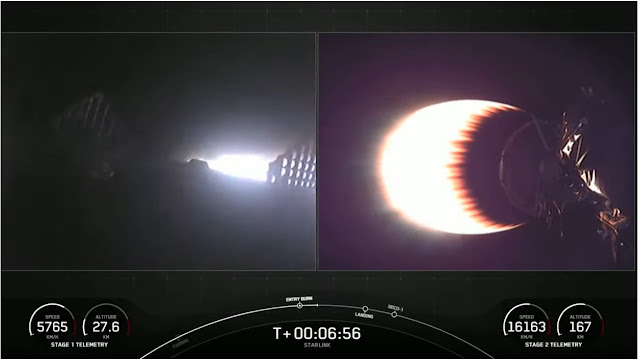 About a minute later, when the landing burn and touchdown on recovery drone Of Course I Still Love You were supposed to be happening, the only thing that could be seen was an orange glow off in the distance. 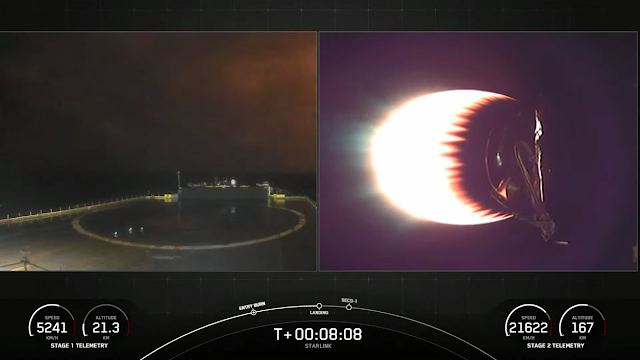 Those white things on deck in the left side image are seagulls that can be watched moving around as the booster was supposed to be approaching.  I recall thinking those were going to be toasted pretty soon and wondered if they could react fast enough to get out of the way but they were spared.

As of this evening, this is still the most recent news I can find.  There was to be a launch of another load of 60 Starlink satellites tonight, just under 26 hours after last night's launch, but that has been delayed until NET than Thursday night (Friday the 19th, @ 0512 in the morning UTC or 12:12 AM EST).  One would assume the delay would be to go over all the telemetry to see if that booster should be checked for some problem.

SpaceX has always stressed on its video coverage that recovering the booster is not the important part of the mission, delivering the payload is.  They've said they expect to lose a small percentage of boosters for drone ship landings.  We've just all gotten so used to watching the booster land in the center of the drone ships' decks that it's a surprise when it turns out this rocket science stuff is actually hard after all.