I have to admit to missing this story when the news came out last Thursday, but the Biden administration has said it supports continuation of the Artemis program.   It's a topic many of us have speculated about in the comments.  At 12:30 PM on Thursday the 4th, press secretary Jen Psaki said,


"Through the Artemis Program, the United States will work with industry and international partners to send astronauts to the surface of the Moon—another man and a woman to the Moon, which is very exciting—conduct new and exciting science, prepare for future missions to Mars, and demonstrate America's values. To date, only 12 humans have walked on the Moon— that was half a century ago. The Artemis Program, a waypoint to Mars, provides the opportunity to add numbers to that. Lunar exploration has broad and bicameral support in Congress, most recently detailed in the FY2021 omnibus spending bill, and certainly we support this effort and endeavor."

That said, as of that Thursday update, there are no real details.  It seems that's to be expected with a new administration as a general rule; Artemis wasn't started until 2017, Trump's second year.  Plus this group is busy tearing down everything else done in the last four years and instituting their new policies everywhere.  It might take a while for the new administration to get down the agenda to something like space.  Ars Technica space reporter Eric Berger reports that current budgets simply preclude the 2024 landing date being pushed by Trump, VP Pence and NASA Administrator Jim Bridenstine - all three of whom are out of government now.


It has been clear for many months that this timeline was unattainable, and the final nail in the coffin came in December, when Congress provided just $850 million for a Human Landing System in the fiscal year 2021 budget. This is only one-quarter of what NASA said it needed to have any hope of making the 2024 landing date.
...
[O]n Wednesday, 11 Democratic senators sent a letter to the Biden administration urging support for the Human Landing System program, which is the critical hardware needed to enable a human return to the Moon.

The senators emphasized the program should stick to the original dates.  "We urge you to proceed with the planned selection and to include all necessary funding for (the Human Landing System) in your FY 2022 budget request," the letter said. 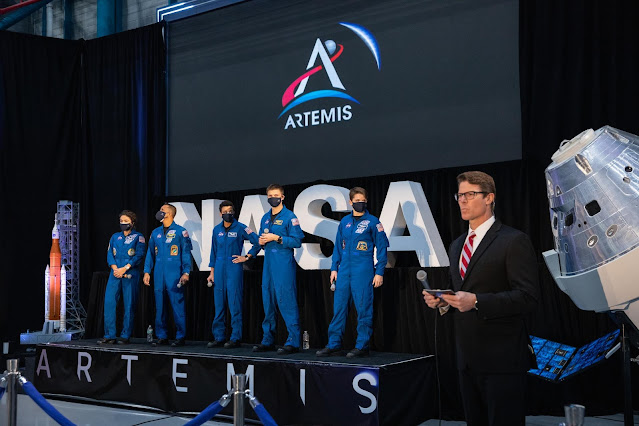 Ars goes on to suggest that it might be appropriate for the Artemis program to slip their moon landing from 2024 until '26 or '28.  He argues that funding requirements and deadlines are probably too aggressive at this point and slipping two or more years is probably going to happen anyway.  He argues to be realistic and set the later date.