Most of the getting started information that I see is based on VHF radios, like the ubiquitous Baofeng VHF HTs (Handie Talkies).  There's nothing wrong with that, but since I've been more interested in High Frequency bands (HF - also known as shortwave), I see a few things that should get some mention.

There are currently nine bands in the HF spectrum from 3 to 30 MHz.  These are referred to by wavelength, a tradition that's a bit odd when you realize the wavelength the bands are named for appears in exactly one of the bands.
As we've pointed out in some of the various antenna posts over the years, antennas work best when they're cut to a specific length for the desired frequency, called being resonant.  The only useful thing about referring to the bands by wavelength is it gives you some feel for how big those antennas should be.  (A half wave antenna for 40 meters is 20 meters long).  For statesiders, you only need to remember one of the following two equations.  A quarter wave wire, in feet is given by L = 234/freq (where frequency is in MHz) while a half wave is twice that or L = 468/freq.  That number is already compensated for the "end effect" of cutting off the wire and wrapping a little into a loop to mount the antenna.  It's about 5% shorter than the wavelength in free space. 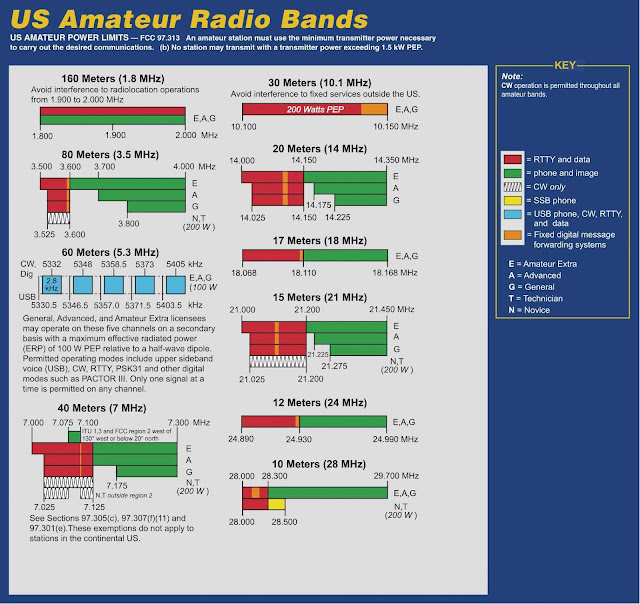 You can get one of these charts in many places.  Keep one near your radio.  I do.

I can tell you based on years of operating all those bands that they all have distinctive behaviors and distinctive groups that hang out on them all the time.  How do you choose which one you might want to start operating on?  There are websites (like this one) that give you an overview of what to expect on each band, and you can listen around  Do you need a separate antenna for each band?  Do you need to run separate cables from each antenna into your station?

You don't have to have a separate antenna for every band, but it's not that hard to get an acceptable signal on all of those bands with one antenna, like a multiband vertical.  Perhaps you might put up a wire for one or all of the lower bands (80, 40 or 30m) and a triband antenna for 20,15 and 10m - most of the spectrum on just two antennas.

For many years in this house, my low band antenna was an Off Center Fed Dipole, OCFD, cut for 40m.  OCFD means the dipole was a normal half wave long (468/7.1 or 65.9 feet total length), but instead of the coax being attached at the middle, about 33 feet from each end, I attached the coax at about half of that from one end or 16.5' from one and left the other end 49.4' long.  That changed the antenna so that one side was 1/8 wave long and the other 3/8 wave long.  Because of that asymmetry, a balun (balanced to unbalanced transformer) isn't needed, however something I read convinced me to use a transformer to 450 ohms at the feedpoint (that's 9:1 impedance or 3:1 turns ratios).  A 3:1 restricted range antenna tuner, like the big radio companies tend to put in their radios, tuned it on every band from 40 to 6m.

There's almost an unlimited number of ways to solve the antenna problem.  A fan array is an easy antenna to make: it's a group of dipoles cut to frequency and tied together at one feed point.  The wires are kept spaced apart with plastic insulators, and since the impedances of the off band antennas are so wrong for the transmit signal, they don't interact.  For example, if you're on 20m the 80, 40 and 10m dipoles don't absorb much power because they're very wrong impedances.

The hidden bonus here is that half wave antennas resonate on odd harmonics.  That adds coverage on 15m as the third harmonic of 40m, (that is, frequencies in the 40 band multiplied by 3 are in the 15 meter band) so although you see four wires, it's a five band antenna.  Yes, I've used one of these, a bit over 35 years ago.  It worked fine.

Another standard antenna is an end-fed wire.  These are called Zepp antennas because it was the type used when Zeppelins were the aircraft of the day.  End fed half waves are high impedance, but friends tell me their end-fed wires work fine with an antenna tuner.  Antenna tuners were covered early in this series, more of a "how they work" than things to care about or watch out for.

The major thing to watch out for when using an antenna tuner anywhere in your system is that the best place for the tuner is at the antenna feed point.  That tends to be really inconvenient, and the most convenient place is in the shack.  The price you pay for that convenience is more loss in the transmission lines as the signal bounces back and forth due to the mismatch.  Which says if you're going to scrimp anywhere, the coax might not be the place.  The loss in a piece of coax is a stronger function of diameter than the dielectric (insulators) used, so RG-8 or RG-213 is better than the smaller RG-58.  Which matters more for long cable runs than short pieces of cable.