It was just two weeks ago when SpaceX shattered the turnaround time for an orbital class vehicle, launching a booster with a 38 day turnaround, dropping the record from the 51 days they set just last summer.  They broke that record again with this morning's Starlink mission when booster B1060 launched with a 27 day turnaround.  It also marks the first time SpaceX has launched the same booster twice within "a month" - not a named calendar month, but the 30 days people colloquially refer to as a month.

Something that's not getting as much recognition is that they've been working to expand their operating envelope - expanding the conditions the recovery ships can work in. 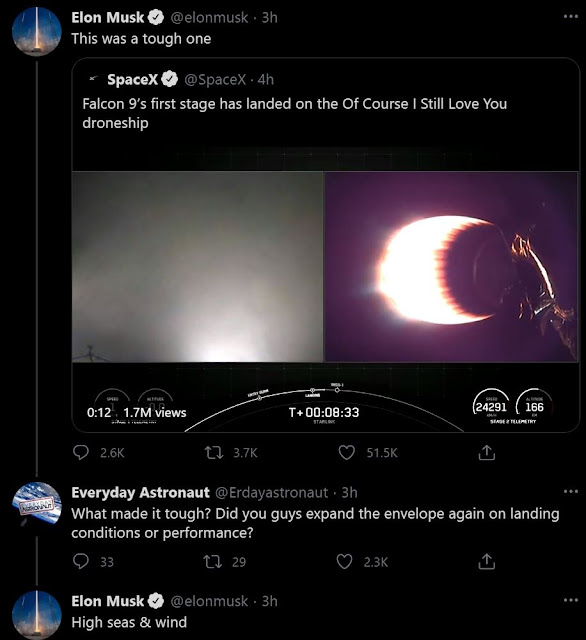 There is much talk about whether the Biden (Ho Jo) administration will scuttle the space program.  Today, Borepatch linked to a story at the Washington Times that focused on the FAA delaying SN9's test flight for a couple of days as an indication that the administration is out to shut down the space program.  I think that's a bit far to leap.  I don't know how idiotic and anti-American the Ho Jo people really are ("very" is not a number), but if they're talking about shutting down Space Force and everything else, they're ceding the high ground to the Chicoms and putting us at an insurmountable disadvantage.  Nobody who knows the first thing about military history would ignore working in space.  To a first order approximation, that sounds like the Ho Jo gang.

The Artemis program is the glaring example to watch.  It was promoted by the Orange Man, so it's an object of hatred and to be destroyed.  On the other hand, the goal is to "put the first woman and the next man" on the moon, so that's pure identity politics, which is bread and butter to the left.  I can see them cancelling the program but I can also see them doing things to extract the maximum credit for it, sort of how they've taken credit for other things Trump did.

Would the Fed.gov shut down SpaceX?  First off, SpaceX doesn't live or die on Fed.gov money.  Their contract for the Artemis program is the smallest one NASA cut and the only NASA money that's going to Starship.  If NASA dropped SpaceX to go back to Russia to put crews on the ISS, they're truly morons and NASA needs to be shut down, but to the best of my knowledge the only contracts SpaceX has with NASA are manned and unmanned cargo drone flights to the ISS.  Their income is from being the leading launch company in the world thanks to upending the world's cost structures with their self-landing boosters.  If the Fed.gov tried, they'd drive them in search of another country to work from.  It would slow down operations until they recovered, but I can imagine a guy like Musk would be welcome pretty much anywhere he wants to bring his billions.

And just because it's a pretty picture, this morning's launch: 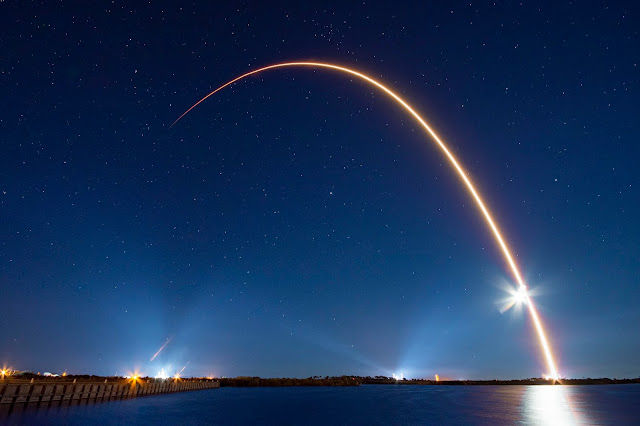