That's a possible interpretation by Robert Zimmerman of Tuesday's news that NASA awarded a contract to SpaceX for a job that SLS was at least partially designed for.

In a piece called "The coming death of NASA's Space Launch System," Zimmerman starts with some of the things we know and adds some detail.  It's worth your time to RTWT.  He starts out with the story I reported Monday the 8th about the Biden administration saying that they will support the Artemis program.  On Wednesday the 3rd, a group of eleven Democratic Party senators wrote a letter to the Biden administration, urging support for the Human Landing System program, which is the critical hardware needed to enable a human return to the Moon.


What made that letter remarkable was that it made no mention of SLS at all. Instead, its focus was to encourage Biden to not abandon construction of the Artemis manned lunar lander, what NASA dubs the Human Landing System (HLS).

Until that moment it had always been assumed in political circles that if you continue Artemis it means you continue SLS. Artemis itself was conceived as a program to give that heavy-lift rocket a purpose. SLS had been mandated by Congress a decade ago when Obama cancelled Bush’s Ares heavy-lift rocket. The problem was that Congress had not proposed any mission for SLS, and thus Artemis was born to give it that mission.

He points out a contract that seemed so minor I didn't mention it.  NASA awarded a contract to startup Firefly to build an unmanned lunar lander.  While the lander has nothing to do with SLS and doesn't seem to be relevant, Zimmerman points out that it strongly implies NASA is going to continue with the Trump-era policy of letting more private companies do previously core NASA tasks.  That was on Friday, February 5th.  The following Tuesday, the 9th, NASA awarded the contract to SpaceX to launch the Lunar Gateway.


Third, this switch from SLS was underlined when the very next day NASA announced that its Jupiter unmanned probe Europa Clipper was definitely going to fly on a commercial rocket, not SLS. For years Congress had mandated by law that SLS be Clipper’s rocket. In January however the new NASA budget had finally released NASA of that mandate, and the agency wasted no time in exercising its option to dump SLS. The likely replacement will once again be SpaceX’s Falcon Heavy, but NASA is reserving that decision for a year.

In our December 4, 2020 piece on the Europa Clipper, we had noted that the currently planned launch date for the mission is in 2024.  If 2024 is firm, the chances are low that it could be anything other than Falcon Heavy.  There is, however, a real wild card in the deck.  It's possible that within two years Starship may have achieved lunar missions and be a more viable platform to carry Europa Clipper.  SpaceX may have even launched unmanned missions to Mars.

At this point in Starship development, it seems unrealistic to think the Clipper program could count on the Starship being ready, but betting against SpaceX seems to be risky these days.  From a system design standpoint, the less change there has to be to configure a payload for Starship as opposed to Falcon Heavy, the easier it is to say you're going Falcon Heavy and switch to Starship if it becomes available.

Leaving that aside, a totally different card was dealt this week.  Alabama Senator Richard Shelby (R) has announced he won't be running for reelection after his current term is up.  I've picked on Senator Shelby many times for being the main reason the overpriced ($146 million for each of the four main engines) and underperforming SLS is still alive.


Shelby, head of the Senate appropriations committee under Republican rule and now the ranking member under Democratic rule, had been for years SLS’s most important supporter, since much of it was being built in his state. No NASA decision on SLS could happen without his okay, and no negative decision on SLS was possible with him in power.

I should be the first to point out that Shelby hasn't kept the SLS alive by himself but he has been a stalwart supporter.  The big picture is that the congressional pork machine kept it alive.  You know the pattern; they distribute contracts in districts around the country to keep programs alive no matter who gets elected.

Given these things, it certainly looks like the SLS is facing headwinds that it has never faced.  As reported the other day, NASA is currently targeting the week of Feb. 21 for the next attempt at the static fire test.  If this test aborts, they'll almost certainly need to do a third.  This core stage is scheduled to take the first unmanned test flight of an SLS by the end of this year.  A second test abort forcing the static fire test to be run three times would probably push the SLS first flight off into '22.  That launch will then be about four years behind schedule, and would have cost the taxpayers about $28 billion. 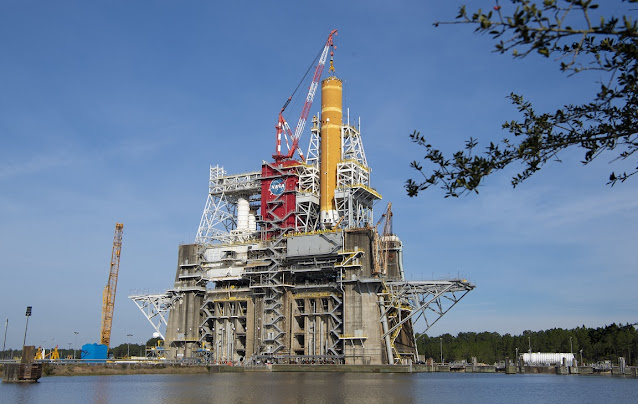 SLS Core stage being loaded onto the test stand at Stennis Spaceflight Center.