Is SpaceX Really In Trouble?

A story broke within the last week that Elon Musk sent an email to the company saying that SpaceX could be facing bankruptcy.  The email was sent last Friday, Black Friday, from Elon at work to employees probably relaxing in their turkey-induced comas from the day before or doing their Black Friday shopping.  Musk said,

I was going to take this weekend off, as my first weekend off in a long time, but instead I will be on the Raptor line all night and through the weekend.

Unless you have critical family matters or cannot physically return to Hawthorne, we need all hands on deck to recover from what is, quite frankly, a disaster.

What's going on?  Is a SpaceX bankruptcy really likely?  It's a bit of a story.  In the immediate aftermath of the email, Musk backed off on the story a bit.  It's not likely, it's not something that is likely to happen without other things breaking down, but it's a possibility.  Here's the tweet, dated Tuesday. 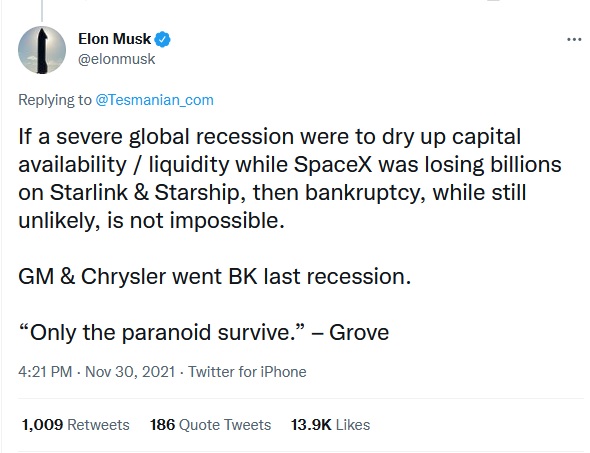 So what's the story?

The story revolves around a relatively sudden realization that Raptor engine production is not going well.  The news broke about a week after CNBC reported that Musk had fired the vice-president of propulsion due to “a lack of progress” in the development of Starship’s Raptor engine. Now, apparently after taking his first good look ‘under the hood’ in a while, Musk says that “the Raptor production crisis is much worse than it seemed a few weeks ago.”

Musk may be a demanding boss, they seriously push to increase their launch cadence and you know there are lots of people working long weeks to do that, but while he may be a hard boss, he's not a full-tilt crazy boss.  Driven, yes; insane, no.

The fact is that apparently Musk had not paid as close attention to the Raptor production facility as he thought and was surprised when he started digging into things.  I think everyone knows that bad surprises are not a good thing to leave for your boss.

This matters because SpaceX has undertaken two immense, unprecedented technological space projects simultaneously. Each will cost billions of dollars—conservatively, $5 billion each, and likely significantly more—to bring to fruition and provide some return on investment. And ultimately, the success of SpaceX hinges on both projects, as they are each to some extent dependent upon the other.

The first big project is well known: Musk wants to get to Mars; not just land on Mars and come back home, but to establish a civilization on Mars.  By his own own estimate, that's going to require "not less than 1 million tons" delivered to the red planet.  In the 60 years of the "space age" the combined efforts of every civilization on the planet have delivered a few tons; probably less than 10 tons combined.  Notice this is not "let's get the government to do this," it's "we're going to do this" where we is SpaceX.  Immediately, the question of "how are you going to pay for that comes up."  Musk is ultimately counting on revenues from Starlink and launch services.  Ultimately, the number of satellites that can be put into orbit by even the Falcon 9 is too low to get the Starlink revenue stream they'll need.

The company has already delivered over 1600 satellites to orbit, more than any country or other organization has ever done, and gathered almost 150,000 customers.  The service, though needs more satellites and more customers to meet its goals.

To reach truly global and reliable service, SpaceX needs to complete its constellation. This is the "Starlink Satellite V2" that Musk refers to in his email. It represents about 12,000 second-generation satellites that are a bit bulkier than the first edition, as they carry more capacity.

To launch these into orbit would require about 300 launches of SpaceX's workhorse Falcon 9 rocket. Although the Falcon 9 is the cheapest and most efficient rocket in the world, that is still a costly proposition. Assuming an internal cost of $25 million per launch, that would be $7.5 billion. And that many launches would likely take seven to 10 years, an eternity for Musk. Finally, these launch costs are on top of the billions of dollars to build the satellites themselves and ground terminals for customers to receive signals.

Don't forget that they're also developing Starbase Boca Chica along with a dedicated Raptor engine factory in Texas.  That's another billion dollars a year SpaceX is spending (well, reported but not confirmed).

This is why they need Starship so desperately.  While a single Falcon 9 launch puts up 53 Starlink Version 1.5 satellites (they weigh more than the version 1 satellites that F9 could launch 60 at a time), a Starship can probably lift 400 at a time.  That turns the 300 F9 launches into 27 Starship launches - of a vehicle designed to be turned around for reuse within a couple of hours.  There's the reason for Elon's priority on getting Starship running.

Which returns us to the Raptor engines that started this story.  While the first orbital Starship launch is likely to be next month, it's not going to be recovered.  Chances are the next vehicle won't be recovered, either.  Each booster will have 29 engines while each Starship will have another 6 - a total of 35 engines used in each test flight.  It's really not unreasonable to think it will take eight to 10 test flights before the boosters and Starships are being recovered reliably.  While they could do it faster, a conservative estimate is that they might need 300 to 350 engines.

By comparison, NASA provided Aerojet Rocketdyne with $1 billion a few years ago to restart the production of space shuttle main engines. Four of these will power each Space Launch System rocket. Each individual engine, on top of the "start-up" fee NASA paid, will cost an additional $100 million. For all of this money, NASA will get a maximum production of four engines a year—engines that are not reusable and largely based on technology decades old.

The target price for Raptors is $250,000 each and scuttlebutt picked up online is that the current production engines are running under $1 million but to get to that final price requires the Raptor 2.  The SLS engines, which are essentially the same thrust, price out at nearly $150 million per engine when that "start-up" fee is amortized over the expected production run.  For a use once and throw away engine.

Unfortunately, we don't know in any detail what the problems they're facing with Raptor production are.  All I can say is that in every kind of product development I know of, "oh, shit!" moments are a regular thing.  SpaceX has had them before and solved them.  My belief is they'll eventually get this situation resolved, too.