At the end of my last update, I talked about cutting down my square bar of cast iron from a bit over 2-1/16" on a side to a size that's more reasonable to turn to the final size, 1.750" on a side.  That's a rather routine step in pretty much all projects.  I cut it down to about 1.875 on each side.

I also said that I plan to mill away some of the protruding corners so that it's easier on the lathe than turning the rectangular crankshaft bar was.  Every revolution of the bar as the lathe spun whacked the cutting tools loudly.  Commenter Malatrope said I should go ahead and make it a regular octagon for the minimum amount of whacking the lathe cutter.

On the cylinder, go ahead and cut it all the way down to a regular octagon while you have it set up on the mill, don't just whack off some of the sharp corners. Then the turning will go smooth as silk.

The question becomes how do I stand the square bar on one of those points and immobilize it against the cutting forces.  To me, the most obvious way is to hold the square in something that holds the 90 degree corner on the bottom.  The most common solution is Vee blocks - they have a 90 degree included angle that's 45 degrees from the base - like this.  I have a pair but they're too big to fit in the mill's vise and there's no way to hold the square bar.  I saw that if I had some smaller Vee blocks such that they supported the square bar but let the vise hold the bar, that should work.  This was followed by some time in CAD drafting to work out the details. 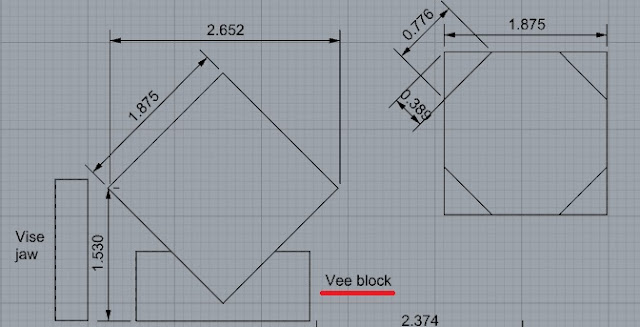 The Vee block is shown at the bottom (red highlight).  The horizontal dimension really isn't critical, it just needs to be smaller than corner to corner dimension so that my vise can close on the corners of the square.

The drawing is busy, but note that the 1.875" on a side square is 2.652 inches across (which my vise can open enough to grab).  There's a dimension there to indicate how high the corners are over the bottom of the vise, 1.530", and a rectangle representing a vise jaw.  The problem is that 1.53" height is over half an inch taller than my vise jaws.  I made a pair of replacement jaws for the vise back while working on the Duclos flame eater engine; those were too short as well, by about a quarter inch.

The Vee blocks don't get high forces (I don't think) so those became a job for the 3D printer. 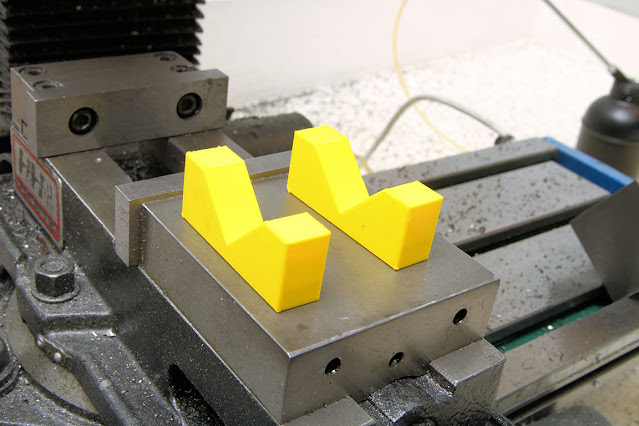 and just to show you the problem with grabbing the bar, the vise jaws need to squeeze tightly on those sharp corners.  Once the top is cut down the right depth (0.389"), the bar is flipped so the bottom point is now on the top and that point gets cut down the same amount.  Then the bar is rotated to put one of the remaining sharp points on the top, at which point the vise is grabbing the newly flat sides. 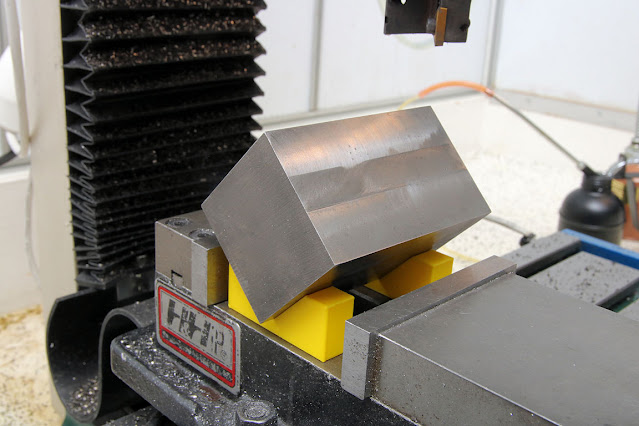 Sure looks like time to make another set of vise jaws.  I took off one of those thick jaws visible there; they're bigger than the body of the vise - and measured the placement of the two holes.  I changed the dimensions while working in the shop today.  Notice the height here is 1.600; that picture at the top is 1.625, and I made the actual jaws over 1-3/4 (I forget the actual number). 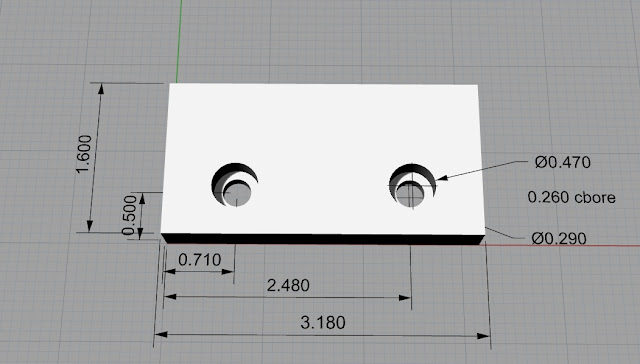 I finished making them today.  They're 3/8" thick steel plate, so less likely to bend appreciably when I crank the vise down onto the square bar.

I ran out of time to test them today, but all of this to make a tool so that I can make a part for the engine. If all goes as hoped, I'll actually be making the cylinder within a couple of days.