For several days, maybe a week, I've been trying to find more details on a reported anomaly that has caused at least a four day delay in the launch of the James Webb Space Telescope from No Earlier Than (NET) December 18th to NET December 22nd.  Details are hard to find, but apparently while in the early phases of mating the JWST to the Ariane 5 launch vehicle something went wrong.  This was earlier this month, November 9th.  The best summary I've found so far is this video from a channel I wasn't aware of.

The story he presents is essentially complete on Space.com.  There's a spring loaded band that's part of the adapter that attaches the JWST to the Ariane and while the JWST was being attached to the booster, that band unexpectedly sprung open.  While nobody was hurt and the instrument appeared undamaged, it was certain that a shock impulse was transferred to the satellite. During movement around the US and by ocean-going ship to its launch site in French Guiana, the JWST was instrumented to record the shocks and vibrations it was exposed to.  Those instruments had been removed at the time of the incident, in accordance with the established procedures.  As a result, nobody knew the exact levels that JWST was exposed to.

NASA convened an Anomaly Review Board to determine what testing is necessary to ensure nothing received more vibration than it was rated for and previously tested to.  On Wednesday, just before the long holiday weekend, NASA tweeted that the review concluded JWST was safe to launch.  (The last line of the tweet, cut off by Twitter, is to here.) 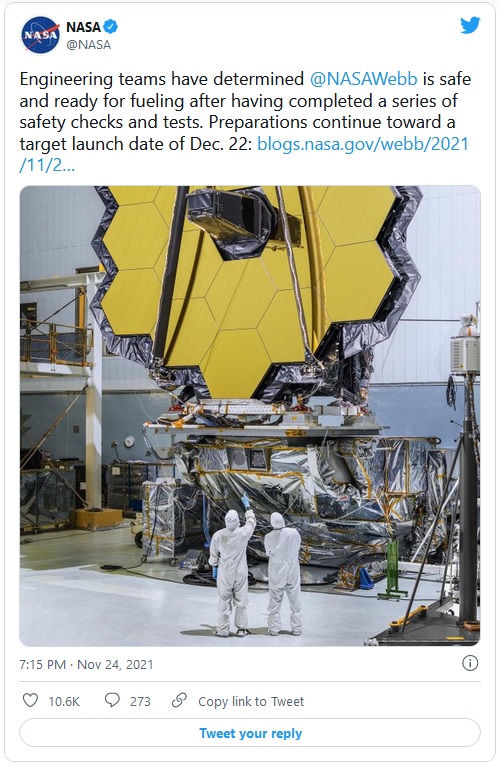 To me, the money quote to end this with is from Dr Thomas Zurbuchen, identified as the director of science at NASA.  He said,

"Just for sheer caution what we have done... [is go back] to a small number of subsystems and just do the functional tests to make sure that nothing happened as this energy went into the [telescope]," he told reporters.

"When you work on a $10bn telescope, conservatism is the order of the day."